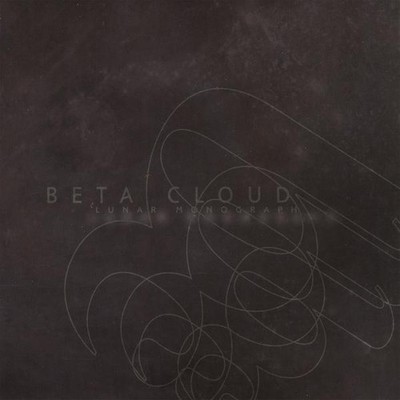 Mastered by James Plotkin. Artwork by Chase Middaugh. Reviews: 'Two tracks in to Beta Cloud's latest release Lunar Monograph I already find myself totally captivated, particularly by the 22-minute masterpiece of piano, rain, and occasional found sounds like sirens that make up "Sea of Rains," a deceptively simple yet elegant piece. This is one of the best mood pieces ever. The track preceding it, "Marsh of Sleep", is equally relaxing and soporific, a skillful blend of ambient textures and field recordings of people milling about in the background. After being lulled into a relaxed state, "Marsh of Epidemics" transforms the atmosphere with a wall of sound and slow heavy beats, reminding me of My Bloody Valentine or early Cocteau Twins. It is a bold move, and one could argue that it belongs on a different album, but it is a quality track nonetheless. "Sea of Tranquility" goes back to ambience, a companion piece of sorts to "Sea of Rains." It sets a darker tone but likewise finds a very comfortable space and explores every nuance of it for 20 wonderful minutes. An organ-like drone floats into infinity as shimmering higher choir-like tones balance it off nicely. More city sounds emerge toward the end. If the disc only contained these two tracks it would still be worth every penny. "Bay of Billows" is a soft sound collage of field recordings and processed guitar sounds that finish off this excellent disc in fine form. Carl Pace, the man behind Beta Cloud, has already set the bar high for 2010 ambient recordings. © 2010 Phil Derby / Electroambient Space' 'Latest disc of blissed out soft focus dronemusic from this longtime aQ fave. After past collaborations with Lull (which is available again and featured elsewhere on this week's list) as well as Aidan Baker, Lunar Monograph is the first disc we've head from BC on his own, and it's definitely a divine bit of ethereal and ephemeral drift. Field recordings are deftly woven into soft swirling shimmering tones, guitars are spidery and delicate, spinning crystalline webs of hushed melody, the opening track is a gorgeous bleary eared whisper, which segues smoothly into the second track, a sprawling 22 minute stretch of delicate piano, wreathed in swirling clouds of muted glitch and streaks of static and hiss, like listening to a solo piano performance, on a hilltop in the dead of night during a rainstorm. The record does get intense briefly, on the surprisingly rocking psych dirge blowout of 'Marsh Of Epidemics', with it's keening chiming guitars, fuzzy blown out buzz and pounding drumbeat, the whole thing propulsive and intense, but also washed out and otherworldly sounding, but the record quickly shifts back into something much more tranquil and contemplative, another 20+ minute slow motion soundscape, this one much less distinct in terms of instrumentation, instead a swirling, looped, processed bit of layered dronemusic, lots of high tones laid upon what sounds like angelic voices way off in the distance, and a softly undulating low end, very choral and cinematic sounding, like a much more mellow Sunroof!, laced with hints of Arvo Part. The record finally finishes with some gorgeous prismatic pop ambience, whirring and indistinct, a slight industrial undercurrent, but for the most part, pealing tones, and barely there melodies, drifting weightlessly through a field of minimal effects, and slow shifting whirs, as well as some mysterious field recordings, that make the end of the record feel like you've just come out of a trance, and found yourself back in the real world, which is not all that far off the mark. So nice. 2010, aQuarius Records'

Here's what you say about
Beta Cloud - Lunar Monograph.