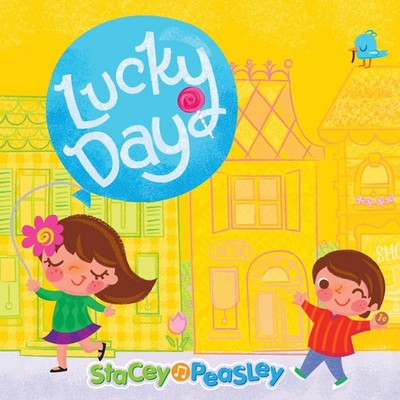 Stacey Peasley ventures into her second album inspired by the influences in her own life as a mom to 3 children, growing through the experiences of parenting. Her evolving pop/rock/soul songwriting style has adapted and grown, much like her family over recent years, paralleling life in the moment. Through this evolution, her music maintains broad appeal with families of all shapes and sizes, evident in the enthusiastic thrill experienced with live audiences. Currently her style is a reflection of early influences from a melting pot of genres including classic rock, pop, disco and oldies. Lucky Day is a tribute to quintessential songs that capture real-life family experiences, such as "Summer Day", a catchy ode to the perfect summertime pastime - a trip to the beach. "Catching Joy" was inspired by the Boston-area volunteer organization namesake. The warm engaging song has a campfire sing-along feel, spreading the message of kindness, thankfulness, and improving the world, featuring the voices of Natick Girl Scout Troop 85128 and other special friends. "Les Awesome" boasts an 80's-influenced rock tune sound conveying experiences with a favorite childhood activity - playing restaurant! Pop/rock anthem "Little Soccer Player" and pop/hip-hop venture "Broken Record" firmly plants kids in the 21st century, through tales of extinct vinyl to the what's hot on the family forefront today. Launching her music career as a member of the New York-based girl group "The Chiclettes," Peasley developed a deep love and appreciation for the innocent, yet catchy songs of the girl-group era. She's appeared live in concert at the Continental Airlines Arena in New Jersey, Foxwoods Resort and Casino, Westbury Music Fair, the Oakdale Theater, the Tropicana Hotel and Casino in Atlantic City, The Center for the Arts in Natick, The Regent Theater in Arlington, Coolidge Corner Theater in Brookline, Amazing Things Arts Center in Framingham, South Shore Conservatory in Hingham, and numerous other festivals and events. Peasley is critically claimed for her first CD Together as winner of the Creative Child Magazine 2012 Top CD of the Year Award, the 2011 Parents' Choice Recommended Award, and the 2010 Nickelodeon Parents Connect Parents' Pick Award for Best Party Entertainer. Her music has been featured on radio programs nationwide, including Sirius XM's Kids Place Live. Lucky Day is produced by Grammy Award winner Marty Beller.

Here's what you say about
Stacey Peasley - Lucky Day.