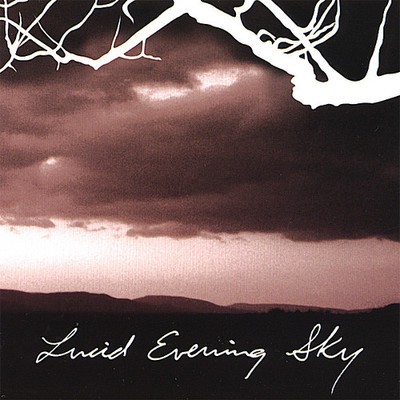 'In a wide land under a tender lucid evening sky, a cloud drifting westward amid a pale green sea of heaven, they stood together, children that had erred.' - A Portrait of the Artist As A Young Man Under the name of Lucid Evening Sky, singer/songwriter Andy Vought completed a self-titled album in 2006 which was self-released online on January 2nd, 2007. Local radio host Paul Shugrue has featured tracks from the album on his program, 'Out of the Box' on 89.5 WHRV. Style Lucid Evening Sky plumbs the depths of introversion to find those sometimes ever elusive melodies that move the soul. Most songs speak to a depressed and painful existence, one that struggles and grapples with psychological confusion, and the dead-endedness of past relationships. In every song is the hope that compassion is not dead, that we are more than just fakers trying to get through, that maybe there is a real faith out there that doesn't place itself high up on a pedestal. But in the meantime, just getting through one day at a time is enough. LosingToday.Com Album Review: Lucid Evening Sky is the vehicle of singer/songwriter Andy Vought. This eponymous debut was self-recorded and although the sound is less than polished the songs contained within are like eleven rough diamonds, highlighting Vought's exceptional talent as both a songwriter and arranger. It's not to say that the production is sub-standard, far from it. It's just that it can be difficult to disguise the limitations of a bedroom studio, but on the whole he copes admirably. From opening track 'Autumn Skin' through to the closer 'You Draw The Line' Vought ushers us through his private world of paranoia, country retreats and alien abductions with honesty and wit, his voice is fragile, giving the songs a Neil Young flavour. It's as a lyricist that he really shines though and there are some entertaining couplets throughout, such as 'the cracks are filled with glue, and we keep slipping through' on 'Broken People' and 'the sun rises and I've got nowhere to hide, all I need's another thorn in my side' on 'Ghost in the Details.' This is easy listening in the most positive sense and nods toward the pastoral indie-pop of Belle and Sebastian and Lloyd Cole in both the breezy, uplifting quality of the music and the insightful lyrics. Elsewhere there are flashes of alt country (American Dream), Dream-pop (The Healing) and folk (You Draw The Line), proving that Mr Vought is as adaptable a musician as he is a sharp lyricist. Whether or not he continues under the moniker of Lucid Evening Sky, he has a bright future ahead of him, not least as a songwriter of rare and genuine excellence. RICHARD STOKOE Leonard's Lair Review: Andy Vought is the American response to fey British pop bands such as The Field Mice or Trembling Blue Stars. Lending further creedence to this claim, he even recorded a cover of Belle And Sebastian's 'Fox In The Snow' for a recent tribute album to that band. Fittingly, this self-produced album is in keeping with this style of music for sensitive souls. The end result is a mixed bag though. 'American Dream' is lyrically astute but it's keening, quasi-easy listening chorus undoes the good work, whilst the childish 'Alien Abduction' only needs to be heard once before it becomes annoying. His best moment arrives at the centre of the record with the wistful, nostalgic 'Last Summer' and both this track and introspective numbers 'Starlight' and 'The Healing' benefit from some lovely, fragrant guitar patterns, not to mention that all important melancholia. Five minutes of the slowly unwinding 'Broken People' also prove he can cut it on longer songs. Although a little nasal, Vought's vocals are distinct and often charming and many of the songs here indicate that - although he's a man out of time - his quest for a tune usually keeps him a step ahead of the other imitators out there.