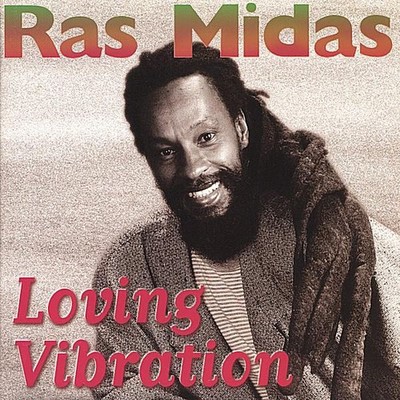 Contemporary roots rock Reggae rhythms with a cutting edge; thoughtful and compelling original lyrics. Ras Midas's seventh album, encompassing 12 original songs and music; it is his third release on JML Records. Loving Vibration was rated by worldwide music critics as the third best independently produced reggae album in 1998. Musicians include Sly Dunbar, Robbie Shakespeare, the Taxi Gang, and background vocals from Marcia Griffiths. Recorded at Harry J. Recording Studio, Kingston, JA; Sylvan Morris, sound engineer. Ras Midas is an internationally established singer, songwriter, performing and recording artist, and composer and producer; he has produced dynamic Reggae music since 1974. At the age of 16, Ras Midas began recording unique and innovative songs for the famous Jamaican producer Harry Johnson at Harry J. Recording Studio, Kingston, Jamaica, with Reggae's finest musicians and vocalists. Ras Midas, a true Rastaman, is an original. With a distinctive style and a silky smooth voice, he sings with the mission of a musical revolutionary; he was dubbed "The Musical Prophet" in Europe early in his career. Ras Midas consistently delivers dynamic, high energy performances, with positive and pensive lyrics floating over steady, solid roots rock Reggae music. Ras Midas's powerful messages of social justice, love, unity, and consciousness have remained unchanged over nearly four decades; "The Musical Prophet" pushes traditional Reggae music into a new, contemporary dimension while retaining it's Reggae roots. 'Lyrically this politically correct album reflecting the loving philosophy of the artist comes straight from the heart as he sings of life, love and liberty. Brilliant tracks include 'Loving Vibration', 'Let the People Go', 'You Don't Know', 'Wake Up Everybody' and Rock You Rock'. A loving Midas shines through on the spiritually moving 'I'll Be Your Friend' while his undying faith in what is right is heard in the title track. 'My Own Way' is an uplifting affirmation of inner strength and independent optimism. Performance: vibrant. Recording: superb. The bottom line: this is not 'toe tapping' music; this is 'get off your butt and dance to the rhythms' music sung with a mello intensity.' -Papa Pilgrim, Dub Missive Magazine Loving Vibration is a great reggae album, and Ras Midas is an impressive artist with a vision." -Norm Dixon, Green Left Weekly (Issue 340) 'In my music I see a better world. I compose my music to bridge the distance between cultures; to make a type of music that everyone can understand. It's about caring for humanity; it's about the environment, and it's about a uniformity of Love." - Ras Midas.

Here's what you say about
Ras Midas - Loving Vibration.