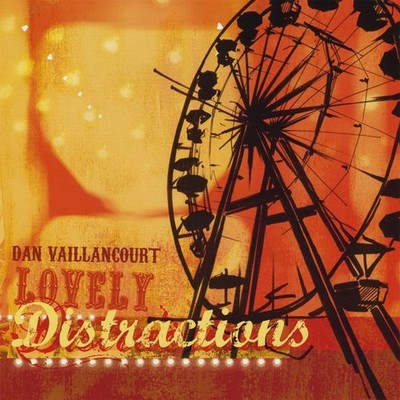 "Life always tends to send me little distractions detouring me into new directions and unexpected adventures... This collection of songs is largely influenced by experiences I have had while traveling and performing music... often finding myself engaged in lovely conversations and adventures that help distract me from everyday life. This album is filled entirely with sounds made by humans, much of it created by my friends and family. Please Enjoy These Lovely Distractions!" - Dan BIO: -Michigan-based singer-songwriter Dan Vaillancourt has been called a virtuosic guitarist, a natural storyteller, an entity all his own and The Jimi Hendrix of Folk! Dan weaves stories of life, love, and travel with quirky aplomb creating a unique kind of music called 'Funktified Folk' which has been heard on radio stations all across the country. A modern day troubadour, he has performed hundreds of concerts in 29 states and counting. Besides being an accomplished guitarist and a well-traveled troubadour, Vaillancourt is also a prolific songwriter and recently was one of only forty-one participants to complete the international 50/90 songwriting challenge, writing over 50 songs in 90 days! Vaillancourt's album, Melodic Snapshots, was met with success across the board. Critics and fans alike showered praise upon the album. Nationwide airplay on over 100 stations landed the album an extended stay on CMJ AAA charts around the country next to the likes of Ben Harper, Wilco, Yellowcard, Van Morrison, Beth Orton, Neko Case, The Darkness, Shawn Mullins, Cat Powers, & Beck. In 2006, nationally syndicated radio program Acoustic Cafe, featured Dan Vaillancourt's on February's One To Watch segment which features and highlights the best of today's up and coming artists. Five different songs from Melodic Snapshots are featured on CD compilations distributed across the United States, Australia, and around the world. Dan's music was in good company appearing alongside artists like Corinne Bailey Rae, Beth Orton, Umphrey's McGee, Donavon Frankenreiter and many more. The five compilations total over 15,000 copies. For his newest album, Lovely Distractions, Vaillancourt garnered the help of Grammy-nominated producer Ric Hordinski (David Wilcox, Phil Keaggy, Ellery). To bring the musical vision of the album to life; Hordinski and Vaillancourt split the recording and mixing duties, many of Dan's family and friends along with the help of a couple of the best Cincinnati session musicians lent their musical talents, and finally multiple Grammy winner Richard Dodd (who has worked with Tom Petty, Dixie Chicks, Wilco, and many more) mastered the album...

Here's what you say about
Dan Vaillancourt - Lovely Distractions.