Roads to Rome - Love Rain Down 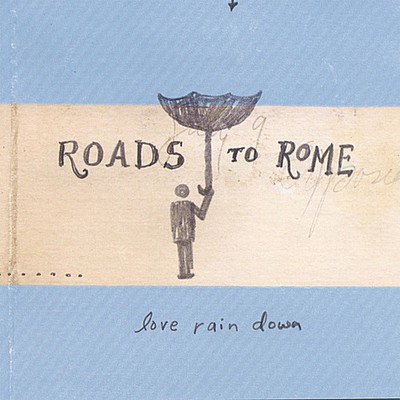 A band of veteran musicians, Roads to Rome was formed in the summer of 2004, and is composed of lead vocalist and guitar/piano player Michael Musick, bassist/vocalist Seth Marcum, Kevin O'Neal on keys and percussion and David Burch on Drums. After a successful tour of Europe in the summer of 2004, Roads to Rome will be touring colleges and venues across the U.S. in 2005. On feb 8th, 2005, their 5 song EP was released to college stations across the U.S. where it charted at #1 along bands like Mars Vlta, Kings of Leon, Ben Folds, U2 and Beck. The EP entitled "The First Five" was produced by Mitch Dane at Sputnik Studios in Nashville, TN, mixed by Vance Powell at Blackbird Studios and mastered at Vital Recording by Richard Dodd. With undeniable likenesses to bands like U2, Jet, and Coldplay, the music of Roads to Rome is passionate, transparent, raw rock n' roll. The passion of the music is coupled by the passionate message of Musick. Michael was born and raised in midwest Columbus, OH. Musick is currently writing and producing all of the songs on the newst album slated for a Fall release on Union Street Records. 'I am trying to write songs that speak into peoples lives, that can let them know that there is someone who understands what you're going through, that there is someone else in the trenches with you. I have strong convictions about my faith because to me Jesus is a real person that I talk to everyday. He is in the trenches with me and it comes out in my music. A lot of my songs are born out of my daily struggles and I'm not ashamed of that.' Currently, Roads to Rome is writing and in production of their yet-untilted full length release scheduled to hit stores in February 2006.

Here's what you say about
Roads to Rome - Love Rain Down.