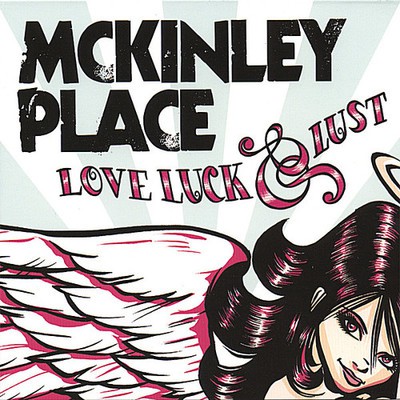 ' Ladies love em, and so do I! We are just lucky to still have these guys around.' -SC Times Hang on tight everyone! The new EP 'Love Luck & Lust' is being released this October and the boys have finally captured their LIVE energy on a recording. Produced by local legends Matt Kirkwold and James Harley (Quietdrive, Lucky Boys Confusion etc.) McKinley Place has taken themselves to another level. MP has now traded in their acoustic guitars for electrics and is THE most energy filled rock band of it's kind. Led by lead vocalist Bryan Shackle, guitarist/background vocalist Patrick Gibbs, and guitarist Michael Kropp, the band's vocal harmonies, and guitar sounds range from big, melodic overtones reminiscent of The Goo Goo Dolls, and Jimmy Eat World to punchy, in-your-face growls similar to the likes of the Marvelous 3 and the Black Crowes. So what do you get when you put all of this together? Original songs that create a rock/pop pulse that hooks you in and doesn't let go! And let's not forget the experience between band members who have shared the stage with national acts such as Train, Marvelous 3, Soul Asylum and Tesla, and regional acts that include Tim Mahoney, G.B. Leighton, Dazy Head Mazy, Leep 27 and many others. But it wasn't always this way, the band evolved from simple beginnings. Growing up in the suburbs, Bryan and Patrick spent most of their time locked in a basement, writing lyrics and screaming songs along to Patrick's percussive guitar riffs. Although they hadn't asked for it, the duo ended up booking gigs and were soon attracting many eyes wherever they played. Not long after, the two decided it was time to lay down some original works. They added a third member (Michael) and made a CD that sold over a thousand copies without distribution. As crowds continually grew larger, and more CD's were sold, Bryan, Patrick and Mike decided, 'Hey, why not make another album'. Determined to create something in their home studio that rivaled a big budget, major label album, the trio set forth on By Design. While continually gigging about 150 shows per year, they managed to accomplish that goal but now faced one problem: they were no longer just an acoustic group. Adding a bass (Jesse) and a drummer (Tyler) this insane quintet was formed. Soon after, the band held an endorsements from Miller Lite, Triple Caff Energy Drink, Deadly Clothing, and Carlicous.com. Now, on the brink of MP's biggest release yet 'Love Luck & Lust', they have already started turning national heads and continue to awe fans with their live show. This acoustic group has slowly morphed into the rock music you PLAY LOUD in your car at 90 miles an hour! 'We always had it in us. We just needed someone to bring it out...Kirkwold and Harley did it!' -B Shackle Check out MP in a town near you and spread the word....WORD.

Here's what you say about
McKinley Place - Love Luck & Lust.