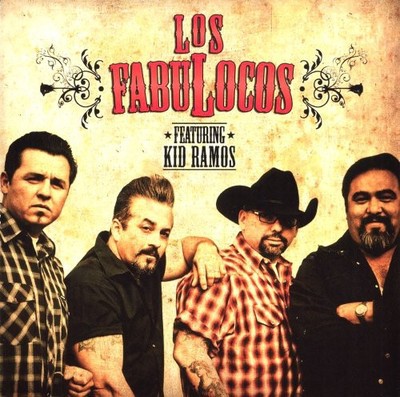 Los Fabulocos play with enough energy to power a small fleet of lowrider vehicles. It's a fuel that burns full- throttle, ignited by the heat of soulful guitar and accordion solos that will make your heart bleed. Anyone with even a passing fancy of American roots music or blues is certainly no stranger to Kid Ramos. Throughout most of the '80s, Ramos was a member of what is often considered to be the classic lineup of the James Harman Band, a group that performed up and down the California coastline and opened for such diverse musical acts as X, Oingo Boingo, the Blasters and the Plimsouls. Ramos left the band in '88 to begin a family, holding down a day job delivering bottled water for several years before eventually being coaxed back into music full time by Kim Wilson in '95 as a full fledged member of the Fabulous Thunderbirds for seven years. Ramos released three successful solo recordings on Evidence Records beginning in '99 and currently plays an active role as a featured guitarist in the critically acclaimed all-star revue, the Mannish Boys. Not one to rest on his laurels, Ramos recently teamed up with vocalist/accordionist Jesus Cuevas, bassist James Barrios and drummer Mike Molina to form the CaliMex roots oriented quartet Los Fabulocos. The band is fronted by Cuevas, who spent a decade lending his talents on accordion with the East L.A. based group the Blazers, known for their rousing, danceable mix of rocked up Norteno, cumbia, and other Mexican styles combined with blues, surf, and country music. Alternating between guitar and the bajo sexto, a type of 12-string guitar commonly associated with Norteno and conjunto music, Los Fabulocos is powered by Ramos' muscular tone and high octane delivery adding more fuel to the fire. Los Fabulocos simmers up a spicy and tantalizing blend of traditional Spanish and Mexican music, Blues, R&B and Rockabilly delivered with sincerity, honesty and passion. It's a special brand of roots oriented music that shares much in common with the south of the border styling's of such pioneering acts as Los Lobos, the Hacienda Brothers, and Doug Sahm's Texas Tornados.