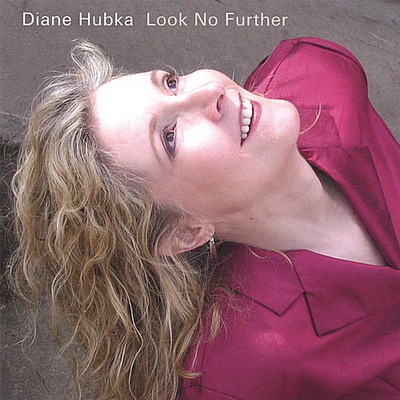 Top Ten New Issues Poll 2001! 'Her relaxed, poised and intelligent practice of the vocal Jazz art make this release a second absolute slam dunk for her.' - Alan Bargebuhr, CADENCE 'This is as entertaining an album as has hit the streets for quite a while with not a single bad track.' - Dave Nathan, ALL MUSIC GUIDE 'Terrific vocals and breadth of songs; this is easily one of the best jazz vocal CD's of the year.' - Ken Dryden,CHATTANOOGA TIMES 'I heartily agreed (and voted) when Haven't We Met? was nominated for a 1999 Jazz Award for Best Recording Debut. Look No Further offers more of the same, and even better.' - Michael Bourne, host of 'Singers Unlimited'; WGBO FM; Newark, NJ 'The sweet-toned timbres of Hubka's voice and the coolly articulate qualities of her interpretations were precisely right for a program that moved easily from whimsical Bob Dorough tunes to standards and bossa novas.' - Don Heckman, LOS ANGELES TIMES Diane Hubka is an engaging performer whether accompanying herself on seven-string guitar or leading an ensemble. With a swinging, sophisticated sound, she displays both a respect for traditional form and a flair for innovative styling. Diane casts a wide net for her material, with a refeshingly eclectic repertoire that includes many lesser known jems, as well as classic straight-ahead Jazz, Blues, American Popular Song and Brazilian Bossa Nova. Diane Hubka won international acclaim when her debut CD, Haven't We Met, with alto sax legend Lee Konitz, was nominated for a 1999 Jazz Award for Best Recording Debut, alongside Stefon Harris, Ravi Coltrane and Brian Blade. Critic Scott Yanow heralded her second CD, Look No Further, as 'one of the best in recent times.' Her newest outing, You Inspire Me is a tribute (and a testament) to her love of jazz guitar and features the singer with seven of the world's top virtuoso guitarists, including Bucky Pizzarelli, Gene Bertoncini, Jack Wilkins and Romero Lubambo with the entire Brazilian Trio Da Paz. Performing in major jazz clubs across the country, she has appeared in New York at Blue Note, Birdland, Knitting Factory, Jazz Gallery and Chez Suzette; the Mellon Central Pennsylvania Jazz Festival, on stage at the Philadelphia Guitar Show; and Washington D.C.'s Blues Alley. Returning to her home town, she has been the featured soloist with the Western Maryland Symphony. She currently lives in Los Angeles where she has performed at the Jazz Bakery, the Jazz Spot, Lowes Santa Monica Hotel and Spazio. In September 2002 she began playing the 7-string guitar, and in June 2003 she played on stage at the Philadelphia Guitar Show, on behalf of American Archtop Guitars by Dale Unger. Concord Jazz recording artist Howard Alden, one of the world's foremost 7-string players, says 'I think voice plus seven-string guitar are an ideal combination. It's rare to find someone who can perform with both single-handedly, but Diane Hubka does just that - beautifully!' This Blue Ridge Mountain-bred artist grew up in Western Maryland in a musical family and learned violin, trombone and guitar from an early age. In college she joined her guitar teacher's group as a singer, and developed her love and knowledge of jazz. 'My teacher, Bill Bittner, playing his big, hollow-bodied Gibson L-7 guitar with a Charlie Christian pick-up, made a permanent impression on my young jazz ears!' she says. In 1989 she moved to New York, after winning a jazz fellowship from the National Endowment for the Arts. She studied voice, piano and guitar with some of New York's premier jazz artists including: Anne Marie Moss, Sheila Jordan, Barry Harris, Harold Danko, Connie Crothers, Gene Bertoncini and Howard Alden. Diane Hubka currently lives in Los Angeles, where she accepts students for private instruction. She also conducts workshops on jazz improvisation throughout the country. A member of the International Association of Jazz Educators (IAJE), she will be presenting a panel at their Jan. 2005 Conference on 'The Voice / Instrument Connection.'

Here's what you say about
Diane Hubka - Look No Further.