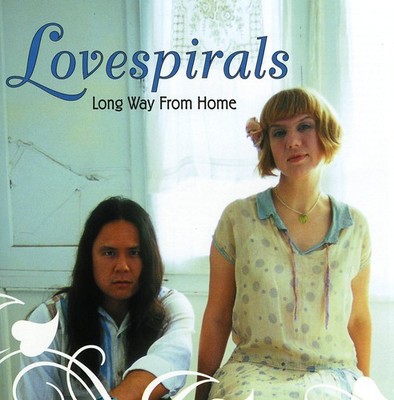 Lovespirals have truly hit their stride on this third album, Long Way From Home. Melding the dreamy folk and rock of their 2002 debut, Windblown Kiss, with the soulful jazz and blues of 2005 follow-up Free & Easy, the duo seamlessly blend prior influences with new sounds and styles. "Sultry chanteuse", Anji Bee, spins seductive tales of beautiful sadness and spiritual longing set to band founder, Ryan Lum's masterfully melancholic music. After nearly a decade of artistic collaboration between singer/songwriter, Anji Bee, and multi-instrumentalist/producer, Ryan Lum, it seems almost a moot point that Lovespirals evolved out of Projekt act, Love Spirals Downwards. Yet Lum's former band incarnation remains popular within dream pop circles; popular enough that his first 2 early 90's albums are currently being reissued. And Love Spirals Downwards have long held the reputation as Projekt's best selling act. So though Lovespirals have been around as long as LSD, the two projects are inextricably linked in many people's minds. Still, Lovespirals have gained many new fans, from both their heavy involvement with the digital music revolution and their growing popularity in the podcasting world. Lovespirals were a forerunner of band pocdasting, launching Chillin' with Lovespials in mid-2005. This Podshow syndicated podcast has detailed their work on Long Way From Home, leaking clips of songs in progress, as well as remixes, live recordings, and demos with thousands of listeners monthly. Bee's popular podsafe music podcast, The Chillcast, has won the band additional fans due in no small part to her stature as "the sexiest voice in podcasting." Lovespirals were one of the first bands to join the Podsafe Music Network, founded by PodShow owner, Adam Curry. The band enjoys strong support not only from Curry's seminal Daily Source Code, but from many other renowned podcasts including Accident Hash, Rumor Girls, Dave's Lounge, and Coverville. The album's first podsafe single, "Motherless Child", was remixed by indie bands including Karmacoda, Hungry Lucy, and MoShang, for a digital EP which is entirely podsafe. Multi-award winning music podcaster, C.C. Chapman, has said Long Way From Home is Lovespirals best work to date, and the band agree. In fact, Lum believes this is his finest work, bar none. Long time fans will be pleased to hear the duo return to their dream pop roots, as well as their return to vocal and guitar based songwriting. With Long Way From Home, bluesy electric guitar abounds, with touches of wistful slide guitar, tinkling piano, and haunting harmonica to evoke a lush, organic, Americana feel. Bee's vocal harmonies soar confidently alongside Lum's guitar with that trademark blend of childlike innocence and mature sensuality that has endeared her to listeners new and old. Lovespirals' music has appeared on TV and cable including MTV, VH1, E!, and The Oprah Winfrey Show.

Here's what you say about
Lovespirals - Long Way from Home.