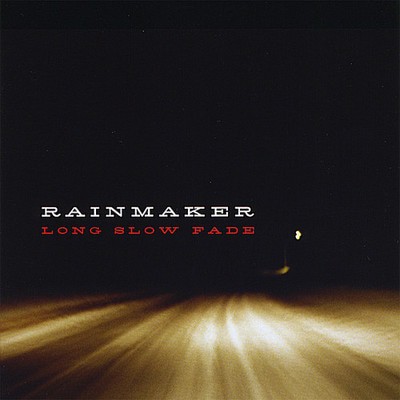 "To stand out amongst the legendary San Francisco music scene is no easy feat, but Rainmaker is a band that deserves to be heard." - David Terpeny, kyndmusic. Rainmaker is a 4-piece band from the San Francisco Bay Area. They blend vintage and modern sounds and draw upon Roots Music, Indie Rock, Funk, and Soul. Since forming in 2005, Rainmaker has logged hundreds of shows together, spreading their infectious grooves, strong songwriting, and family style vocal harmonies throughout California and beyond. Their most recent effort, Long Slow Fade is a compelling combination of classic American Music with a distinctly modern lyrical perspective. Set against a backdrop of soulful, rootsy rock, much of Long Slow Fade laments the slow death of the analog era and explores the issues that characterize the digital age. Rainmaker began when John-Paul McLean (bass/vocals) and Jonathan Chi (guitar/vocals) met on their first day at Berklee College of Music in Boston, MA. They immediately began writing and gigging together wherever they could - from local bars to the nearest T stop in Boston's subway system. After leaving Boston and Berklee, they moved together to Northern California, and began working in recording studios while continuing to write, record, and gig as a duo. They began in the studios as interns, and since then have played just about every conceivable studio role, from taking out the trash, to engineering, producing, playing as session musicians, and eventually recording and producing their own records. Over the past few years, they've had the opportunity to work with artists including: Jolie Holland, Galactic, Mickey Hart, Bill Frisell, Charlie Hunter, Zakir Hussein, Bernie Worrell of P-Funk, New Monsoon, Vinyl, and many, many others. As a result, the duo's evolution as writers is coupled with an ever-evolving approach in the studio as producer/engineers. After playing with dozens of musicians in hopes of forming a 4-piece band, Jon and JP were lucky enough to connect with drummer Inkx Herman. Inkx was the house drummer at the legendary Shifty Records in Johannesburg, South Africa during the anti-Apartheid uprising. After leaving South Africa, he has worked with artists such as Paul Simon, Sting, Hugh Masekela, and Vusi Mahlasela. Inkx's funky grooves, and song-oriented approach to drumming instantly clicked with JP and Jon. Shortly after, Rainmaker began playing with keyboardist Jordan Feinstein. Jordan's vintage keyboard styling's and gritty harmony vocals rounded out Rainmaker perfectly. Jordan has played with artistis including: G Love, Brett Dennen, George Porter of the Meters, Tea Leaf Green, ALO, and many more. Since coming together in 2005, Rainmaker has logged hundreds of shows and recording sessions together, developing an undeniable chemistry. They have appeared at festivals, theatres, and clubs in California, Oregon, Nevada, and Colorado. In 2007, they were named runner-up in Relix Magazine's Jamoff!, a national competition for unsigned bands. After catching a live Rainmaker show, Jim Greer, producer for Galactic observed, "They are one of the tightest bands I've seen in quite some time. Rainmaker is a band worth paying attention to."

Here's what you say about
Rainmaker - Long Slow Fade.