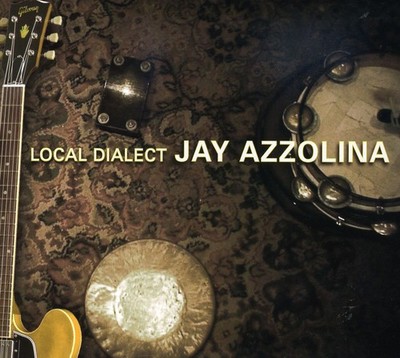 'Local Dialect' features: Tim Ries - saxophone John Patitucci - bass Larry Goldings - organ Greg Hutchinson - drums Produced by Janko R ________________________________________________________________ Like every outstanding instrumentalist and jazz composer, Jay Azzolina is not the type to coast on the reputation he's won for himself. And so on Local Dialect, his new project for Garagista Music, the celebrated guitarist does something he's never done on any previous release: Rather than concentrate on one particular genre or theme, he decided to open the doors of his imagination and let the music dictate where it would go. Pick any track from this album and it'll suggest a context from which it might have been plucked. There's 'Mind Your Mind,' for instance, a burning B-3 cut that features organ wizard Larry Goldings and drummer Greg Hutchinson, laying down a silky, prowling groove that might have emerged from a Larry Young session. But there's also 'Angel's Dance,' a swirl of acoustic guitar, spacious yet sharpened with a steely bite, like a liqueur that's aged without losing it's edge, and powered by a rush of Cyro Baptista's percussion. 'Exit Strategy' harks back to bop, with Hutchinson lighting the fire. And it all starts with 'Friends of Friends,' probably the most adventurous outing in Azzolina's catalog, a concoction of complex rhythm and unusual horn arrangement that appeals to the mellow soul as well as the inquisitive mind. Frankly, Local Dialect is a little risky - but it's also the fullest self-portrait Azzolina has committed to disc to date. Why? 'I just wanted to do something with a lot of different elements,' he explains. 'Rather than just do an all-straight-ahead record, an all-backbeat-urban record, or whatever, I just decided to let different kinds of music come out as it may. And actually, it was a lot of fun.' That is apparent in every moment of this diverse collection. Whether adding his distinctive harmonic flavor to the silky, breezy blues of 'Smile for Me' or pumping funk over the rain-sheen glisten of 'Acceptance,' Azzolina's performances sprawl across the map of invention, hard to pigeonhole yet impossible to mistake for anyone else's work. The familiarity of his style testifies to his history, going back to his run with Spyro Gyra, his associations with Patitucci, Jeff Beal, and other innovators, his sessions on dates by clients ranging from Rickie Lee Jones to Kenny Werner, and an education at Berklee and a masters from SUNY Purchase that didn't get in the way of his intensity as an improviser. Local Dialect puts the pieces of this story together. But there's one new piece to consider: This is the first album for which Azzolina made use of his computer as a compositional tool. 'I'd never done that before,' he admits. 'Up until now, I've written with pencil and paper. That can be a slow process. This time, a lot of what I did came from playing to drum loops. All of a sudden, tunes got written in half a day. That was really enjoyable.' Not just fast, the process also stimulated Azzolina to explore new territory. Most noticeable, on several tracks from Local Dialect, is his unusual approach to writing for horns. Rather than put a big section together, he restricts himself to three players: saxophonist/flutist Tim Ries, trumpeter Scott Wendholt, and trombonist Mike Davis. And instead of flaunting them for dramatic effect, he leaned toward blending them into the background as a more subtle sonic element. This take on arrangement fit in with Azzolina's disinclination toward following conventions of writing for brass. Collaborating with Ries, he came up with clustered chords that evoke his own sound on guitar. 'These are literally my voicings, applied to the horns,' he points out, 'adding a texture and outlining the harmony.' When the best results called for letting go of the reins, Azzolina let go. 'That's what happened with Greg's drumming on 'Friends of Friends,'' he notes. 'I did the demo to a drum loop. Then Greg said, 'Let me try this.' He played four bars over the head, we discarded the loop, and he took the tune to another level. I could never have imagined the kind of stuff he did - which is why I called him for this date.' Recorded over the space of a few days at The Cutting Room and Quad Studios in Manhattan, Local Dialect benefits from Janko Radosavljevic's street-smart sonic conception. With his double-barreled background in jazz and hip-hop, the Yugoslavian-born producer invests Azzolina's performances with an urgent, immediate presence. Plans are underway for Azzolina to tour behind Local Dialect later this year. For now, this music is plenty live enough on it's own. 'Whether this music jumps lines, that doesn't really matter to me,' Azzolina sums up. 'I'm not catering to any one crowd anymore. This is honest material, it came from me, and it's who I am at this point in my life. That's what matters to me now as a musician, more than anything else.'

Here's what you say about
Jay Azzolina - Local Dialect.