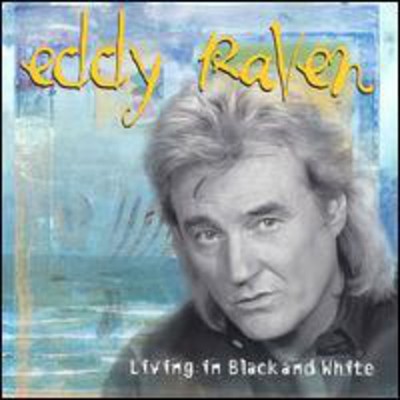 Born Edward Garvin Futch, it's no wonder that his name was changed by a record executive to Eddy Raven on his very first single, released on tiny Cosmos Records in the late '60s. Numerous influences have made his music almost indescribable: the Cajun sounds of his native Louisiana, the blues influence from working with Johnny Winter, the rock & roll of his idol Elvis Presley, and the pure country of the Grand Ole Opry. Befriended by Jimmy C. Newman, Raven made the first of many trips to Nashville in 1970, though he didn't move permanently for a couple of years. Signed to a publishing deal with Acuff-Rose, he wrote songs for Don Gibson and Roy Acuff, among others, and started making records himself in 1974. Despite the acclaim of his peers, Raven didn't actually earn a hit record as a recording artist until 1981, with the release of his Desperate Dreams album. After he lost his recording contract in a 1983 consolidation involving Elektra and Warner, Raven took the next year to re-align his business. The Oak Ridge Boys earned a hit at that time with his song 'Thank God for Kids,' and Raven came out of his forced vacation strong, signing with RCA and gaining his first number one single with 'I Got Mexico.' For the next half-dozen years, Raven remained a consistent staple of country radio: frequently adventurous, always listenable. Eddy Raven began playing music when he was a child in Lafayette, Louisiana, joining a garage rock band when he was 13 years old. Three years later, his family moved to Georgia, where Eddy landed a job working in a radio station. He also managed to cut his own song, 'Once a Fool,' for the local independent label, Cosmo. The record was released under the name 'Eddy Raven,' and Edward Futch used that moniker as his stage name from that day forward. In 1963, the family moved back to Lafayette, and Raven began working in a record shop called La Louisianne. The store's owner had a label of the same name, and Eddy cut several records for the label, including his 1969 debut album That Crazy Cajun Sound. Jimmy C. Newman happened to hear That Crazy Cajun Sound and was impressed enough to land Raven a publishing deal with Acuff-Rose. Following the record's release, Eddy began singing for Jimmie Davis' band. By 1971, other artists had begun recording Raven's songs, with Don Gibson taking 'Country Green' into the Top Five; Gibson also recorded 'Touch the Morning,' while Jeannie C. Riley covered 'Good Morning, Country Rain' and Roy Acuff sang 'Back in the Country.' Soon, Raven had gained a reputation as a songwriter and a performer within Nashville, and once Don Gant of Acuff-Rose became an A&R man for ABC Records, Eddy had a record deal of his own in 1974. For the next two years, he had a series of minor hits for the label, highlighted by the number 27 'Good News, Bad News' in 1975. He left the label in 1978, staying with Monument for one year before signing with Dimension the following year. None of his singles for either label were big hits, and he left Dimension in 1981. Later in 1981, he signed with Elektra, where he had his first big hit with the number 13 'I Should've Called.' Over the next two years, Raven had three Top 20 singles for Elektra, setting the stage for his breakthrough into the Top Ten in 1984. After spending 1983 resolving legal and mangerial problems, Eddy signed with RCA Records, releasing 'I Got Mexico' in the spring. The single was a big hit, becoming not only his first Top Ten single, but his first number one hit. For the remainder of the decade, he had a string of Top Ten hits for the label, including the number one singles 'Shine, Shine, Shine' (1987), 'I'm Gonna Get You' (1988) and 'Joe Knows How to Live' (1988). He left RCA for Universal in 1989, and he had two number one singles for the label -- 'In a Letter to You' and 'Bayou Boys.' Once Universal collapsed in 1989, he moved to their parent company, Captiol, but his records for the label were largely ignored because radio was beginning to program newer artists instead of veterans like Raven. Raven opened RMG Records in 2000 and has artists like Don Williams and Gene Watson on the label.

Here's what you say about
Eddy Raven - Living in Black & White.