The Christines - Living at the Bottom of the Sea 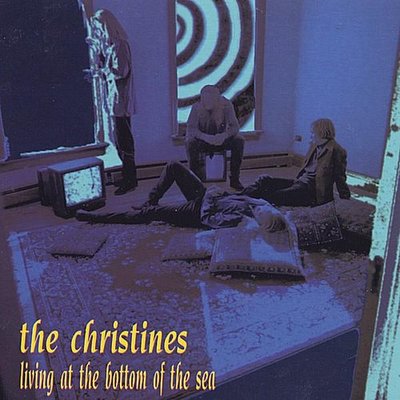 The Christines surfaced in Denver in 1992, haunting venues such as Seven South and the Skyline, and hit their stride after the release of their self-titled debut CD in 1994 (the single 'Hollow' played regularly on KTCL and college radio nationwide). Back in the days of metal, flannel, and grunge, the Christines were part of a new resurgence of pop music in Denver (along with notable bands such as The Apples in Stereo). For a five-year span, The Christines were the reigning champs of shoegaze fuzz in Denver, touring nationally and opening for the likes of Oasis (during their crowning 'Definitely Maybe'--era prime). A lineup change and two years later they released the follow-up 'Living At The Bottom Of The Sea'. A move to San Francisco led to the recording of the band's third album, due for release any second now. The original four members of the Christines have not played together since 1995 and they're looking forward to this special renunion, as are many of their longtime friends and fans. Review of The Christines - Living At The Bottom Of The Sea The Christines are an ideal example of a band that uses pop elements to create mood and texture. Rather than subscribe to different genres altogether, which many bands often do, The Christines manage to cover much ground while always remaining The Christines and nothing but The Christines. Living At The Bottom Of The Sea is not only testimony to this, but also to the fact that it's a darn fine CD regardless! The opening 'In Between Worlds' serves as a great introduction by way of it's solid pumping rhythm and a nice jangle-filled pop melody. The signature, breathy vocal appears here and throughout, and serves well. 'In Your Space' is another example of this, accompanied by a hypnotic swaying rhythm. The arrangements at work here reveal a band that has a strong sense of the adventurous. 'Passed Out In Showers' is a very evocative number, benefiting greatly from a tremendous delicate guitar solo that doesn't take a thing away from the song's mood. Working even better is the ethereal 'The Secret Song.' Here the band favors an appealing, new wave-sounding keyboard melody that works perfectly at creating a mesmerizing sound, complete with a terrific chorus. This is probably the highest point on the CD, but not far behind is 'Crawl On Radio.' Some solid drumming helps this one, along with a garage-like guitar sound with just a little hint of psychedelia to make it even bolder than it already is! 'Secretaries,' with it's appealing lyrics and gorgeous melody satisfies as does 'The Day Before.' The band sounds expecially good when they accompany their affecting melodies with a faster rhythm. Living At The Bottom Of The Sea is truly an outstanding piece of work. While ethereal music often is used as an excuse to hide limitations, as is often the case with the lo-fi movement for example, The Christines use the medium as a showcase for it's value and place in pop. I'm glad The Christines have taken residency here. ~Claudio Sossi (Shake It Up!)

Here's what you say about
The Christines - Living at the Bottom of the Sea.