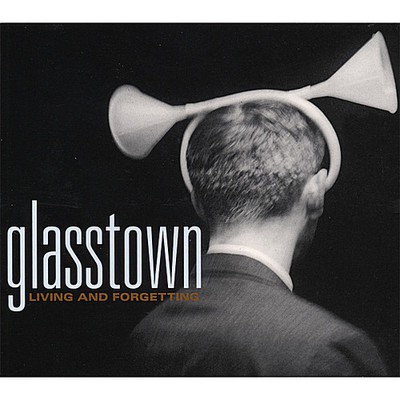 In it's early incarnation, Glasstown was notable for it's prominent use of French horn (supplied by Glen Swarts who has worked as a session musician with Burt Bacharach and Ray Charles to name a few) and a lineup that included up to eight players. Eventually scaled down to a five-piece, the band recorded 'Living and Forgetting' in 2001, courting the epic song and delivering powerful, passionate and intensely melodic material. Singer Adam Klein and keyboardist Michael Mullen (his solo records can be found under the name: Pocket Shelley) are also the writing forces behind the bands Roman Evening and The Size Queens. On this album, they were joined by guitarist Jim Sweeney, who earlier worked as an engineer and producer for Acoustic Alchemy, Creeper Lagoon and other Bay Area bands, and by drummer Alex Laipenieks, formerly of Overwhelming Colourfast and the Mr. T Experience. Dax Rossetti played bass and synthesizers on the record. He currently lives in the U.K. but continues to work on his own fine solo project. Rich Trott played bass and Moog as the newest member of the band, and now fronts his own band, Palace Family Steakhouse. When it came time to make the CD, "Living and Forgetting," the band sought out producer Michael Belfer of Tuxedomoon and the Sleepers, to ensure that their own art rock tendencies would be nurtured. The resulting work covers the high and low ground of such uncompromising artists as Bowie, Magazine, and Jim O'Rourke. The writers' picaresque preoccupations unfold through tales of personal failure and occasional, unexpected triumphs. The songs offer vivid tableaux of life on the margins. "The French Couple" details an evening spoiled by too little money and the arrogance of neighboring diners. "Library People" mourns the fate of those who take up residence in libraries, post offices and laundromats, and 'Gilded Age' evokes the sorrows of the overindulged. "Living and Forgetting" was one of the few CDs to be reviewed by the shape-shifting author JT LeRoy. 'Glasstown always brings out the Bronté contingent. And everyone is Branwell, the fucked up loser Bronté brother. And once they hear Adam's erudite poetry, mysterious Bronté secret-society references, and the music['s] ...kind of symphonic pop power, they get all horny as fuck.' J.T. Leroy, New York Press 'Glasstown is a San Francisco band with an original but completely accessible sound...the sound this bunch makes is lovely, soaring, witty, flamboyant, dramatic, sad, wistful and joyous. The band has accomplished musicians, a terrific singer and a live show that is both polished and stirring, which is a hard balance to strike. It's the best Bay area band I've heard in years.' ---William Friar,Contra Costa Times, Knight Ridder 'The energetic pop/rock momentum took off early in the evening. Glasstown's unique line-up offered an array of sounds that crossed the 'quirky' pop spectrum from bouncy Sgt, Pepper-isms to the left-of-center stylings of XTC.' --Amplifier On-Line 'Glasstown's live shows are hardly a reading room experience. The band creates rich and exhilarating soundscapes and their songs-fearlessly emotional, often funny, and always smart-elicit devotion from their fans.' --Bronté Student 'Glasstown's ruminations on isolation and forlorn love are eerily lush, cinematic and transporting like the gentle score to some dreamy Eurotrash flick. Singer Adam Klein's whiny wail and literary imagery suggests what might happen if Neil Young wrote songs curled up by a fire with some Kundera and red wine.' -- Greg Heller, BAM.

Here's what you say about
Glasstown - Living & Forgetting.