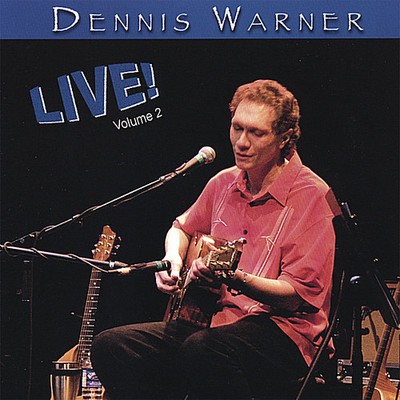 Eight albums and a whole lot of concerts later, Americana singer/songwriter Dennis Warner is recognized for his crafty wit, skillful musicianship and the special ability of captivating an audience. His unique blend of music and humor continually brings him to well over 100 cities each year. Accompanying his smooth vocals with his six and twelve string guitars, Dennis has performed his adult/family oriented concerts at not only major theaters, clubs and some of the best festivals around, but also in the small towns throughout America, drawing inspiration for songs that appeal to the universal aspects of our lives. His many credits include hosting Jammin' with Dennis Warner, a special live radio show broadcast by National Public Radio affiliates. Dennis has also been featured on numerous regional T.V. and radio programs, as well as national broadcasts of NPR's Great Acoustics, Live! And River City Folk. Warner's biggest honor was being invited to give a concert at the Kennedy Center in Washington D.C. He's also a three time "New Folk" finalist for songwriting at the internationally acclaimed Kerrville Folk Fest (co-founded by producer Rod Kennedy and legendary performer Peter Yarrow of Peter, Paul and Mary), the same award that helped launch the careers of Lyle Lovett, Nanci Griffith, Mary Chapin-Carpenter, David Wilcox and many others. Dennis has also appeared many times at Nashville's famed writer's club, the Bluebird Cafe. During the summer of 2004, one of Warner's songs, Beads on One String, evolved into a children's picture book. As educators began using the book in their classrooms, The Beads On One String Project™ was born as a meaningful and fun way to teach kids about the negative effects of bullying and the positive effects of recognizing our "connectedness" in the world. Proving to be popular and timely, the book is already scheduled for it's fourth printing in late 2007. From his home in Minnesota, Dennis Warner has traveled through every U.S. state during his twenty plus year career. Vocalist Prudence Johnson and instrumentalists Peter Ostroushko and George Maurer are among the many talented musicians who have recorded with Dennis. On and off the stage, Dennis is one of the most personable performers you will encounter. Thoroughly professional, he not only looks out for the needs of the audience, but is a great friend to the presenter as well.

Here's what you say about
Dennis Warner - Live! Volume 2.