The Knobs - Live from Siberia 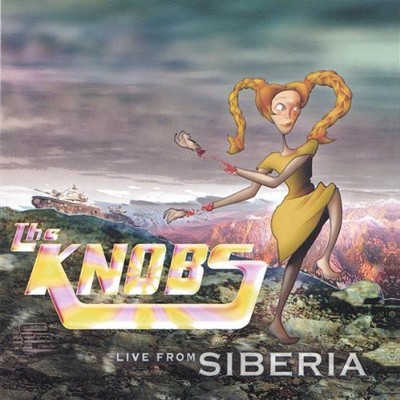 THE KNOBS: A BRIEF HISTORY BIRTH The Knobs were formed in the primordial ooze of the fecund swamp that is Doctor Jellyfinger's Paradise Jam. One drunken Tuesday night that became a blacked-out Wednesday morning in the back room of Otto's Shrunken Head, Wet Levi - former leather panted drummer of Porn Rock - was mercilessly pounding the shit out of the abused house drum kit, oohing and ahhing his mellifluous backing vocals while Kenneally (aka Dr. Jellyfinger) barked infantile, irreverent rhymes into the mic and thrashed at an out of tune guitar. Upon hearing this soulful cacophony Ron Vodka - the talented and cantankerous tuba player from the Klezmer band that had played the Hot Slot earlier in the evening - stood up, emptied his spit valve and laid down a fat line of punk tuba the likes of which had never before existed. At that moment The Knobs slid from the birth canal, hit the beer soaked floor of Otto's back room, busted out of the placental sack, downed a shot of whiskey and haven't stopped rocking since. CHILDHOOD The Knobs cobbled together a few songs and took the stage at New York's most famous lesbian meat market - Meow Mix. Those ladies ate it up and really seemed to get off on the aggressive, percussive assault of tunes such as 'Stay Up', 'Amnesia/Déjà vu' and of course the bitter sweet ballad of unrequited love 'Lesbian Girl' - the age old story of a young man so heartbroken by the fact that the woman he cares for happens to be same-sex-oriented that he beseeches God for not having bequeathed him with a vagina. After tearing up asphalt and burning down venues from Boston to New Orleans, the #2 band in America returned to New York to play the musical event of the new millennium - Tubapalooza. An uplifting introduction by famed competitive eater - Crazy Legs Conti led into the dissonant, sonic chaos known as 'The Ball of Sound'. So inspired was one observer that he leapt to the stage to join the fray Kalimba in hand. His eyebrows: painted paisley swirls. His teeth: diamond encrusted. His hair: wild saffron. His heart: pure gold. His name - NILSEN. This veteran of the New York rock and art scene added another level of percussive transcendence to the music and helped elevate the sound to new heights of elegance. When the magical dust had settled The Knobs - now four strong - knew what they must do: it was their duty to bring this music to the world. ADOLESCENCE While touring Eastern Europe the band heard a shrieking, distorted guitar noise so startling and horrendous that it caused both pairs of sex organs on the Kyrgyzstani hermaphrodite that was displaying his/her goods to the ever curious band, in exchange for the last of their Euros, to shrivel up and pucker. Wet, Vodka, Nilsen and Jelly immediately entered the dingy, fusty, basement Bierhaus that the sound had emanated from. They were shocked and enthralled by a young virtuoso with unparalleled guitar technique. From Kommissar to Hausfraus. From Schlusselkinder to Ausslander. Every man, woman and German in the place screamed and cried his name - KEEF! KEEF! The Knobs nodded at each other and knew that they had found the fifth piece of their unsolvable puzzle. Keef Yaun became a Knob and a man that night. SUSPENDED ADOLESCENCE What was to be a small concert on a frozen potato farm in northern Siberia turned out to be the 'Woodstock' of northern Asia. They came by horse, covered wagon, Yugo, Viking boat, dogsled, snow mobile, armored vehicle and some even traveled across the frozen Arctic Circle to be at the event. If it wasn't for the fearless work of security experts -Hungry Charles aka the Godfather and Badlands Booker - the ecstatic fans may have stormed the stage and ripped the band to shreds. Fortunately the waves of insane 'Knobheads' were repelled again and again by this brave duo and The Knobs performance that day was able to go on. Engineer Ross Bonadonna ended up capturing one of the most important recordings ever scratched into wax cylinder. His amazing engineering work in these extreme conditions is a testament to the man's stick-to-i-tof-ness. To this day many of his dearest extremities are still damaged from working outdoors in this icy, unforgiving environment. The cold cylinders were given to a young Inuit girl who mushed her Huskies across the Bering Straight and delivered them to Kurt Upper the famed musicologist, nurse and mixer who just happened to be hunting the elusive Alaskan snow dragon in Barrow at that very time. Kurt immediately entered the studio and didn't surface for five weeks surviving solely on the area's abundance of pure virgin snow. He poured his soul and heart into the mix and finally staggered out, blinking in the harsh light of day, holding a CD above his head and declaring - 'I give you THE KNOBS LIVE FROM SIBERIA! This shit is done! What do you want me to do with it?' Mixer's note: This is apocryphal. The famed musicologist/nurse/mixer Kurt Upper did NOT say: 'I give you THE KNOBS LIVE FROM SIBERIA! This shit is done! What do you want me to do with it?' What he REALLY said was: 'The legendary Stanley Kubrick once entered a Hollywood editing suite occupied by Woody Allen and his film editor, hard at work on one of Allen's projects. After a particularly frustrating sequence, Allen sighed and remarked to Kubrick, 'Well, Stanley, you just can't Polish a turd....' To which Kubrick replied, 'Aaah Woody, but you can...if you FREEZE IT.' And thus, I have spent five harrowing weeks in the bowels of Barrow, applying Kubrick's filmmaking neuroses to this Knobs recording. I hope you all have brought eye protection, because this turd has been polished to a LUSTER! Refrigerate after opening.' - Kurt Upper.

Here's what you say about
The Knobs - Live from Siberia.