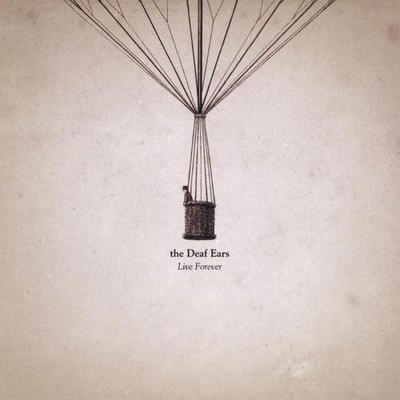 The story of The Deaf Ears begins with the 1999 movie Oxygen, a mediocre thriller starring Adrien Brody about a kidnapper who kidnaps a rich woman and buries her alive somewhere in Manhattan, leaving a masochistic cop 24 hours to find the grave before the victim runs out of oxygen. One lazy summer afternoon in 2006, singer-songwriter-pianist Joel Mullins, leader of Austin's acclaimed indie-pop quintet Tammany Hall Machine, was watching the movie on the USA network, when the words "deaf ears" appeared on the screen. It immediately occurred to Joel that this would be a great band name. At the time, THM was working on it's second album, recording at Ohm Recording Facility with producer Scott Oliphant, who had previously played drums for Austin noise-rockers Halley. Joel and Scott became friends and soon began jamming together as a 2-piece just for the fun of it. By the summer of 2007, with THM winding down, Joel decided he wanted to record a new album with Scott on drums. The Deaf Ears were born. Joel had already written and demoed about 20 songs, and he and Scott soon began developing ideas for recording them. They recruited ex-THM bassist Mick Southerland to complete the rhythm section, and the trio entered Ohm Recording Facility in October 2007 to begin putting the album to tape. With Mick playing bass, Scott engineering and playing drums and guitar, and Joel singing and playing piano and guitar, the band learned each song and carefully crafted each arrangement in the studio, continually changing their individual parts as the collective whole developed, sometimes spending more than 8 hours recording the rhythm section for just one song, then overdubbing a variety of vintage organs and electric pianos, guitars, harmonies, and percussion. This process, though time-consuming, produced fantastic results. THM broke up in early 2008, leaving Joel with more time to work on the new band. In May of that year, The Deaf Ears asked guitarist Geoff Dupree (Leatherbag, Tammany Hall Machine) to round out the lineup, and the four-piece continued recording at Ohm. In late 2008, the band played it's first live shows and immediately earned the respect of the two people there. Far more successful shows soon followed. During the past year and a half, The Deaf Ears recorded more than 15 songs, some of them multiple times, wrapping up the recording process in April 2009. In an age when most commercial recordings are edited and auto-tuned to death, The Deaf Ears have chosen to leave their tracks raw and untouched-stray handclaps, closing doors, and all. Every track was recorded to 2-inch tape, and absolutely no computer edits were made. The result is the organic sound of living musicians playing real instruments in an actual room. The 10-song, 31-minute debut album from The Deaf Ears, entitled Live Forever, will be released on September 26, 2009. We think Adrien Brody will like it.

Here's what you say about
Deaf Ears - Live Forever.