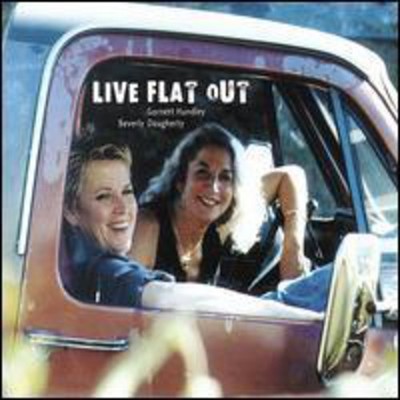 GARNETT HUNDLEY & BEVERLY DAUGHERTY When Garnett and Beverly first began collaborating five years ago, they each brought 20 years experience as solo artists to the stage. But it's together that they've created the remarkable sound and energy that is at once so powerful and inspirational. Based in Seattle, their global music ministry has taken them around the United States, to Mexico, South America and soon to Egypt. They've performed with such well-known speakers as Dr. Wayne Dyer, Gary Zukov, Don Miguel Ruiz, Rev. Dr. Kathianne Lewis and Reverend Mary Manin Morrissey. In 2002, Garnett and Beverly released their first CD together, 'Live Flat Out', and followed up with 'Christmas' also available on cdbaby.com. They are currently at work on their third CD project with expected release dates of early 2006. 'Joining forces (...with Garnett...with Beverly) has been the joy of a lifetime.' 'Singing is a gift one person may have, but everyone can share!' GARNETT HUNDLEY - born on a Virginia Army out-post, the daughter of an Army Chaplain, began singing as a joyful way to stay engaged during oh-so-many church services - and never stopped. She sang with the Bar-Belles (barbershop), First Church Christian Church, Anarundel High select - anyone who would have her. She headed to the College of Wooster in Ohio - her focus on music, where she met Mark Brown, singer/pianist/guitarist/trumpeter, with whom she formed the band Stonehouse. Up to this point, Garnett's musical life had held strictly to classical and sacred music, but it was quickly expanded to include folk, country and pop. After college, Garnett and Mark went on to travel as a musical team for the next 20 years (yes, we were hippies). Stonehouse produced 2 albums (of course, vinyl) - 'New Again' and 'Buck Up'; hit the musical theater stage with the original production of Charlie Parkhurst; went through various personnel changes and emerged as Garnett Brown & Reed, a high-energy, masterful 3-part lead-vocal harmony band, in the mid-80's. Following the success of Garnett Brown & Reed, Hundley and Brown joined forces with master jazz and blues-man, Paul West, to form the group Surprise. After the birth of Nathan in 1987, she took time away from theater and music, surfacing to discover the New Thought spiritual movement and form the trio Sorella in 1988. Sorella, Italian for sister, recorded their CD project, 'In Spirit,' in 1999. Garnett currently performs as a solo act and with Beverly Daugherty, with whom she conceived, wrote, recorded and produced the CD project, 'Live Flat Out.' BEVERLY DAUGHERTY - Beverly was born in Pasadena, CA. Beverly was destined to be a singer/songwriter/performer from the early age of 10 when she formed her first all-girl band, Unauthorized Personnel, to perform at the local school talent show. Even though her band came in 2nd behind an all-boy band (they had a drum set!), she would not be discouraged. Through her teen years she continued singing and playing guitar for anyone who would listen. She studied voice and guitar privately and worked in many different types of bands. At the age of 15 she had a 'spiritual experience' and only sang 'Jesus hippie music' until coming to her senses sometime in her twenties when she found the New Thought movement. After many failed attempts to be a 'rock star' in Los Angeles, she moved farther north to Seattle to start life anew and find out the real meaning of life for herself. As she continued to sing and perform for the local New Thought churches, she realized that her gift was singing and creating music that was inspirational and spiritual. In 1998 she released her first CD, 'Sunday Best,' which consisted of songs that were her favorites. Beverly currently performs as a solo act; as the mistress of glib, Rev. Bev; and with Garnett Hundley, with whom she conceived, wrote, recorded and produced the CD project, 'Live Flat Out.'

Here's what you say about
Garnett & Beverly - Live Flat Out.