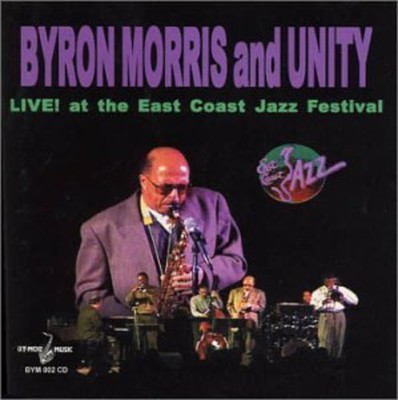 BYRON MORRIS and UNITY, Live! At the East Coast Jazz Festival, BYM002 CD. Featuring: BYRON MORRIS, alto saxophone, an independent record producer and co-founder (1972) of Unity. Also, a former radio program host on WPFW-FM in Washington, DC, The Bright Moments show. EDDIE ALLEN, trumpet, one of the most sought after musicians (trumpet/flugelhorn,composer,arranger) on the New York City Jazz, Latin and Theater scenes today, has performed with Steve Turre, Billy Harper, Joe Henderson and Mongo Santamaria, and with Unity since 1985. PEPE GONZALEZ, bass, with his great sound and feelin' gives a sparkle and boost of passion and energy to the Unity sound since 1983. MARIA RODRIGUEZ, piano, the legendary one pianist, composer, arranger par excellence and teacher, her only performance with Unity, and her only Live recording, she passed in 1998. BOB BUTTA, piano, he simply sizzles when he plays the piano, he brings the full jazz lexicon to any performance situation, with Unity since 1994. LENNY ROBINSON, drums, a veteran sideman and leader of his own trio, they relesed a CD in 2001, he has performed with Stanley Turrentine, Gary Bartz, Vanessa Rubin, and with Unity since 1985. GERALD (REID) PENNINGTON, trombone, a fine trombonist with an outstanding sound, his ballad playing is a thing of real beauty! A teacher and bandmaster with his Church orchestra, former Howard University Jazz ensemble and Trouble Funk Go, Go Band player, Gerald, has done it all with Unity since 1986. With all this musical talent, you have got to hear them! In Unity, Live, and Swinging! JazzTimes Reviewer; Willard Jenkins says: 'Byron Morris' alto sax playing is crisp and pungent, bursting out of the various passages with a fervor reminiscent of Jackie McLean.' JazzTimes writer; Tom Terrell, calls this Unity CD: 'A watershed recording!' Coda magazine writer; Steve Vickery, says: 'The appearance of Byron Morris and Unity at the East Coast Jazz Festival is a homage to the masters (Miles Davis & Thelonious Monk) that succeeds on it's own terms.' Armando Canales of the Critical review says: This is one album (CD)that you must own.' BUY IT NOW! CALL NOW! TO BUY THIS CD BY CREDIT OR DEBIT CARD, CALL 1-800-289-6923.

Here's what you say about
Byron Morris & Unity - Live at the East Coast Jazz Festival.