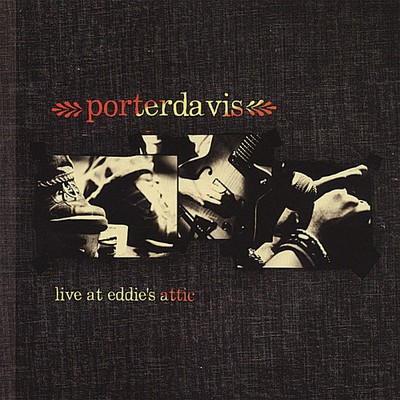 GET DOWN WITH DAN AND THE BOYS: "This is a good one, if you're inclined to shake it," announces Dan Barrett, as he starts the intro to Penny Candy, one of Porterdavis' irresistibly danceable tunes. As the songwriter and lyricist for the band, Dan peels back layer after layer with each song, revealing the very heart of Porterdavis. KEEPING THE FAITH: Underneath the feel-good grooves, the expressive and honest lyrics, and the smooth 3-part harmonies, their music is founded on a deep appreciation for their musical roots. Before every performance, Dan, Mike, and Simon will toast to the show, and pour a sip on the floor in reverence to the musical heroes who have come before them. Ray Charles, Stevie Ray Vaughan, Elvin Jones, Miles Davis, Townes Van Zandt, Muddy Waters, and Little Walter are all among the names honored each time the guys take the stage. This is a tradition Dan and Mike picked up during their studies in Ghana, West Africa in 2004. Chances are you will be gripped by Mike's innovative and unique choice of percussion instruments. Staying true to his beliefs, he draws the instruments, rhythms, and techniques entirely from their Brazilian and African roots. UNDERGROUND ROOTS: After studies at Berklee College of Music, Dan and Mike got their start, and the name of the band, in Boston, MA by busking in the Porter Square and Davis Square subway stations. It wasn't long before they worked their way up out of the subway and into one of Boston's premier listening rooms, the Lizard Lounge. Sell-out shows quickly followed. BLOWING IN FROM ENGLAND: Simon joined the band after Dan and Mike had moved their home base to Austin, TX in 2004. He hails from the United Kingdom where he spent his formative years playing blues harmonica - landing the National Blues Harmonica Title at the age of 17. Simon solidified the roots/ blues sound of Porterdavis, by adding a third harmony and of course the evocative sound of the harp. CO-EDS AND LOUNGE LIZARDS: In the past two years, Porterdavis has made a big impact on the college circuit, playing at over forty different campuses. So far they've taken part in six NACA and APCA regional and national conferences. The band is also a regular favorite at several of the nation's most prestigious listening rooms including Antone's (Austin, TX), The Cactus Café (Austin, TX), Eddie's Attic (Atlanta, GA), Moonlight Music Café (Birmingham, AL), The Evening Muse (Charlotte, NC) and The Lizard Lounge (Boston, MA). The guys have shared stages with Melissa Etheridge, Lyle Lovett, Marc Broussard, The Fixx, Ellis Paul, Josh Kelley, Michelle Malone, South Austin Jug Band, and more. UNRAVELLING IN AUSTIN: In October 2005 Porterdavis released their debut full-length album "15 Hours Unravelling," reaching #10 on Waterloo Records' national sales chart, and #2 in Texas Sales. Coupled with live on-air performances and album airplay on local radio favorites KUT and KGSR, Porterdavis found their home in the busy landscape of the Austin music scene. Give Me Some of It The Porterdavis experience is a plate of some slow-cooked musical soul food with a pint of your favorite beverage. This is roots music from the heart, aimed to move the body and soothe the spirit. The guys finish many of their shows with Blind Boy Fuller's classic "Custard Pie." The chorus calls for the band and the crowd to shout, "Give me some of it!" These words crystallize a band hungry to stomp out some true blue music, and their fan's desire to receive it. Like your favorite watering hole, and your favorite bbq, Porterdavis is the place you'll go to get it simple, raw, and feeling alright.

Here's what you say about
Porterdavis - Live at Eddie's Attic.