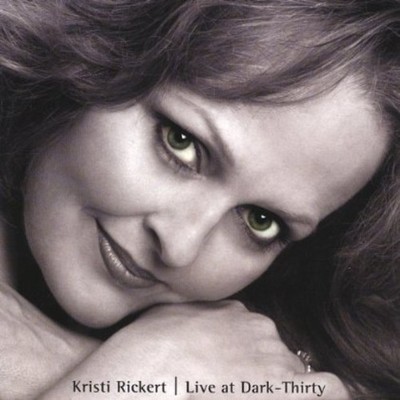 Kristi Rickert has been delighting San Diego audiences with her unique blend of standard jazz, pop and show tunes in performances at many of San Diego's finest piano rooms since her arrival here from the midwest 17 years ago. Her stunning voice, intimate style, and strong accompanying skills have twice earned her San Diego Magazine's Best Piano Bar Pianist award. With Ms. Rickert's background, that's not surprising. She grew up in a musically talented family; her father was an operatic singer with a Ph.D. in Vocal Education who toured as a big band singer in his youth. Kristi began training her voice and her ear very early, singing in her father's choirs and listening to and loving the music of the great standard jazz composers: Gershwin, Ellington, Harold Arlen, Cole Porter, Rogers and Hart, and others. Her primary love, however, was never opera or classical, and Kristi joined her first rock band at the tender age of eleven, playing bass guitar. She continued playing in dance bands during high school and, after graduation, began touring with the band she was in at the time. Besides touring throughout the Midwest, Ms. Rickert did longer stints on Nantucket Island, in San Francisco, New York City, and Scottsdale Arizona, performing Top 40 rock, country, jazz, Big Band, and everything in between. Then, during a brief visit to San Diego in 1985, Kristi fell in love with the area and decided to make it her home. She was soon performing in a variety of clubs and quickly had an enthusiastic following. In 1990, Ms. Rickert landed the job of her dreams: an engagement at the Top of the Cove Restaurant, well known as a true listening venue for the great standard jazz composers she'd loved since childhood. Of this music Ms. Rickert says, 'It is truly well written. The melodies, the harmony, and the lyrics are all of a quality of which I never tire. The songs are timeless, and sooner or later, all fine singers discover them and want to do their own interpretations.' After a six year stay at the Cove, Kristi was commissioned to write a musical with her sister Winnie Hiller and took a hiatus from performing until the project was completed. The musical, entitled 'If You Will It, It's not a Dream,' was staged in Los Angeles and ran for two consecutive seasons. Rickert then returned to performing at other upscale places: the La Valencia Hotel, Bertrand at Mr. A's, and the Westgate Hotel. In 2001, Ms Rickert returned to the quiet, elegant Top of the Cove. 'I love the intimacy,' Rickert says, 'and that I can focus on the music I love most: standards and Broadway show tunes. At the Cove, the performance is not a backdrop for conversation; it is the focal point of the evening. People come in just for the music. This makes it a very rewarding place to perform.' Recently Kristi has felt called to work in collaboration with other musicians again and to focus completely on singing. When invited to record a live CD with piano virtuoso Joe Fos, she jumped at the chance. Rickert and Fos enlisted the aid of well known local bassist Bill Andrews, and rehearsals began for the Live at Dark Thirty album. About the recording itself, Ms. Rickert says, 'The evening was pure magic for me. The audience was wonderful and seemed as enchanted as I was; I think the excitement is evident on the recording, too.' Ms. Rickert attributes much of the evening's success to the incredible venue lovingly created by Jimmy Duke and Linda Piro at Dark Thirty Productions. Besides performing, Kristi Rickert is an avid vocal coach and dedicated church musician. She is the Director of Music Ministry at Pacific Church of Religious Science and continues to compose inspirational music, both alone and with her sister Winnie. And now that the call to record is clamorous, Kristi says she is ready to work on a CD of original music. This will be good news to Kristi Rickert lovers, for if there is one thing said most by fans who describe her work, it is this: her music is inspired.

Here's what you say about
Kristi Rickert - Live at Dark Thirty.