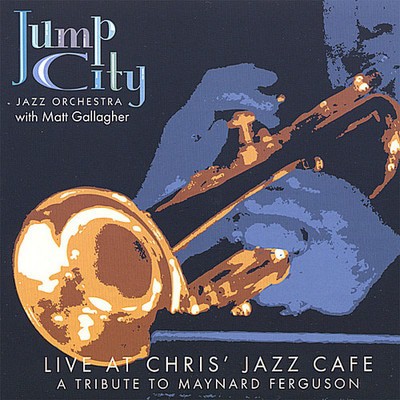 Maynard Ferguson redefined the art of trumpet playing and the sound of a big band. He was one of my earliest influences, and I fell in love with big band music listening to his mid-1970s recordings like "Chameleon", "Gospel John", and "Birdland". I was always amazed at the way he was able to create such an incredible sound while fronting an unbelievable big band. As I continue to discover more of his work, especially from his early days with Stan Kenton and from his own big bands, I marvel at not only his unique sound and solo work, but by his incredible accuracy and sense of ensemble playing. In his 1952 recording of "This Is an Orchestra" (on the acclaimed recording New Concepts of Artistry in Rhythm), Stan Kenton described Maynard Ferguson as 'someone capable of stirring great feelings of fire." In his characterization of Maynard's "fire", I believe that Kenton was speaking about something more than MF's incredible musical abilities. I believe that Kenton was also describing Maynard Ferguson's personality and energy. I had the pleasure of seeing Maynard in concert several times, including 2005 in Coatesville, PA. While his endurance on the horn may have diminished as he got older, his endurance as a performer was as strong as the first time I saw him live in the late 1980s. He had a smile on his face, joked with the band and seemed genuinely excited to be on stage. The band seemed to feed off of this incredible energy generated by Maynard's mere presence and the music they made was inspiring. After 60+ years of performing, the fire was still there. I truly believe that the MF spirit lives within the Jump City Jazz Orchestra. This Philadelphia area based 20 piece big band includes several full time musicians who perform regularly at a pay rate much lower then they could get as a soloist or as part of a smaller group somewhere else. The group also includes several amateur members whose only major musical performance outlet is the JCJO. We come together for a weekly unpaid rehearsal and perform twice a month at various public and private concerts, events, dances and weddings throughout the year. When asking myself why so many talented people would make such a deep commitment of their valuable time, I get the sense that each member's answer is similar to my own; the pure joy that comes from performing with a high energy, professional, big band that's committed to putting on an entertaining and high quality show. I treasure the sense of camaraderie I share and the friendships I have built with the members of the Jump City Jazz Orchestra. October 25, 2006 marked a very special event for the JCJO and for me personally, as we paid tribute to Maynard Ferguson and his legacy before a standing room only crowd at Chris' Jazz Cafe in Philadelphia. There was a buzz throughout the crowd for the entire evening. We featured Matt Gallagher, a world-class trumpet player who, like Maynard, stirs great feelings of fire in his performances. Over the course of a four-hour evening, Matt displayed incredible endurance and musicianship while soloing and leading the trumpet section for many of our selections. For this tribute, the JCJO dug deep into it's extensive library, inspired by the 20th century's greatest artists, and played 36 numbers in total including 13 selections from the MF song book and two encores. The evening concluded with Matt's very stirring performance of Danny Boy followed by a moment of silence for the Boss. We were very fortunate to have our long-time associate and a gifted sound engineer, Thomas Petroski, record the evening's performance. What you hear on this CD represents the best moments from this magical evening. I would like to personally thank the members of the Jump City Jazz Orchestra, who went above and beyond the call of duty to prepare for this tribute. In addition, I would like to thank Ed Etkins and Ken Moyer for their arranging talents as well as Robert Robb for his contributions to the evening's program. Maynard passed in 2006 at the age of 78 after a lifetime of creating wonderful music. This is our tribute to both the man, and the art form he helped create and that we are so passionate about. I hope you enjoy listening to it as much as we enjoyed putting together. --JCJO Artistic Director Bob Wagner.