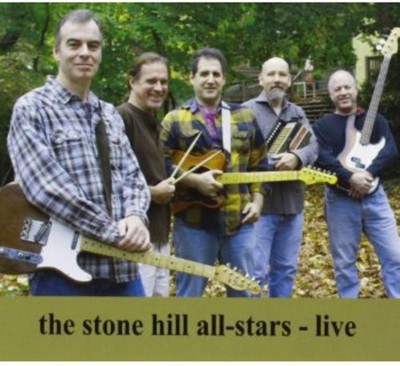 "Stone Hill" - that's easy. It's the name of a well-hidden Baltimore neighborhood of 19th-century cottages where John Shock, the brilliant keyboard player on this recording, lived for several years. But "All-Stars"? Is it presumption, or a sort of ironically inverted self-deprecation, that leads a band to adopt such a handle? In this case, it's just a frank self-description. All-Stars they are: a seasoned, versatile and madly adept ensemble that can switch rhythms as neatly as a school of herring changes course to avoid a hungry predator. In days of old (say, 1969) we'd have called a band like this a 'supergroup': the members' pedigrees trace back to some of the best Baltimore bands of the past three decades. Shock's accordion first tickled our ears when he played with Two Legs in the 80s. With guitarist Paul Margolis he went on to found The Polkats in 1987 and, in 2008, The Stone Hill All-Stars. Dan Naiman, formerly the muscular saxophone player of Two Legs, reinvented himself as the All-Stars' bassman. Hoppy Hopkins, the longstanding, hyperkinetic frontman of the beloved Mambo Combo, is the steady and oft-poetic drummer on these tracks. That's the core group, and the bare-bones narrative. This live performance, recorded one steamy night in August 2012, features frequent collaborators Tim Pruitt (guitar), Craig Considine (trombone), and Lou Shach (harmonica), each of them with too many band credits to be listed here. Considine, in particular, seems to have played with everybody in the Chesapeake Bay watershed. While the All-Stars have made a specialty of fresh, almost unrecognizable covers, all the songs here are originals, with lyrics mostly penned by the prolific Margolis (the exception, "Happy Again," written and sung by Shock). Kitchen smells, shop-window reflections, and rueful ruminations weave through these character sketches, with wordplay on a par with the author's nimble fretwork. You'll hear echoes of smoky European cafés and American bars; bleak urban landscapes and even bleaker suburbs; tunes that tug at all strands of the afro-latino-britannic musical fabric. Play this in the background while you make dinner. Play it in the foreground and dig the instrumental legerdemain. Find a quiet hour to absorb the stories and the poetry. Then go find the first Stone Hill All-Stars CD, and add both gems to your shelf of outstanding music from the Land of Pleasant Living. Tom Chalkley, Baltimore, MD December, 2012.