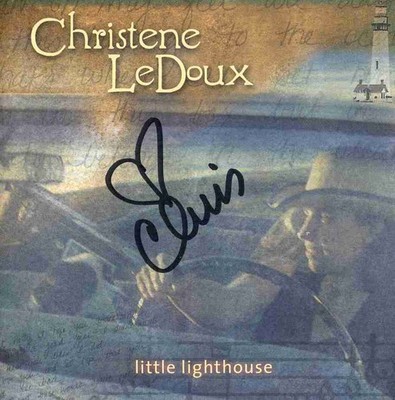 Christene's CD made it on to CDBaby's Top 100 sellers of 2003 & TWO different 2004 compilation CD's... Given to 5000 CDBaby.com customers each time. Thanks for getting her there! * * * * * * * * * * * * * * * * * * * * * * * * * * * * * Exerts from... Performing Songwriter's Top 12 DIY Pick - July 2004: 'Studied, quiet and disarmingly honest, Christene LeDoux's Little Lighthouse is a brave and hushed record ... conjuring the finest and most understated qualities of the current contemporary singer-songwriter genre.' Maverick Magazine/UK, Special Pick/Ladies Choice (2005): '...Upon popping in this CD, and hearing the first notes of Enya-like, Christene can transport you to other lands, or bring you home to a place within your heart...' 'Christene paints perfect, little vignettes of life with her songs - all the richer due to the pleasure of listening to her sensual voice.' - Bill Groll, Austin Americana '...a thoroughly nice record in every way.' - David Cowling, Americana UK '...Little Lighthouse is packed with sixteen songs, with the first as good as the last...' - Greg Tutweiler, Singer Magazine 'Christene Le Doux's album 'Little Light House has hardly left my CD player...' - Windsor Art Centre, UK July 2007 ************************************************************ A Telluride Troubador Finalist, Falcon Ridge Folk Festival Finalist, Rocky Mt. Folks Festival Finalist, Founder's Title Folk & Bluegrass Festival Finalist, USA Songwriting Award winner and Billboard Songwriting Award winner to name a few, Christene's down to earth approachability and heart-warming songs are quickly winning the hearts of both fan and industry alike. Although reminiscent in some ways to folk icons Nanci Griffith, Patty Griffin & Kate Wolf and with a voice often compared to that of the late Eva Cassidy, it's not to be mistaken that Christene's voice, songs and show are all her own. Arthur Jefferson of 'San Francisco Art Magazine' put it best whenhe wrote, 'The lyrics of Christene LeDoux are so clear and vivid that with each note and tone she emits, a detailed form seems to take shape in our minds. To call LeDoux a storyteller is to understate her skills. She is an artist creating exquisite imagery through song. Her entire performance was pure art, her voice of angelic purity. Through every song the crowd was entranced, the aura of their love and appreciation a palpable presence in the club. This is what the experience of music is all about.' Christene has, as a many folk singers before her, lived hard and traveled far, earning each mile and tale as only a wandering minstrel can do. Living everywhere from California to Arizona, Alaska to Connecticut, Colorado to Tennessee, Texas to London, on the roads & in the campgrounds of the US in her Ford truck & Airstream trailer and now the alps of Innsbruck, Austria - this well traveled troubador is a gifted storyteller, mesmerizing singer and possesses some of the best songwriting & lyrics out there. Christene has done everything from writing sports in both California and Arizona to fueling airplanes at the Grand Canyon after her car broke down there on her way to training in Washington DC to work with children in Ghana, Africa. She did a brief stint in Alaska raising huskies, held a job at a lipstick holder builder factory in rural Connecticut, worked in Real Estate, as a waitress and as a mountain photographer in Vail, Colorado. In San Francisco, Christene started a dog-walking/training business, trained and worked as both a clown, children's party planner and caterer and as her music began to take hold, was hired for one of twelve auditioned spots to play the outdoor stages at Fisherman's Wharf and Ghiradelli Square. There she honed her skills and before she even had a CD to sell, managed to sell over 5000 home-burned demo CD's to both locals and tourists from around the world. Finding her calling as a songwriter at nearly 30, Christene finished what would be her last job before music was her job, a full-time live-in nanny. For those that have crossed paths with Christene - they know calling Austin, Texas, London, England and Innsbruck, Austria home is exactly what you would expect from not only a self-confessed Tumbleweed but an often labeled perpetual wanderer. As one British reviewer wrote, 'She delivers both stories and songs with such passion and conviction that you can't help but know she is onto something good. I was left in no doubt that to see Christene perform live is about more than just live music. It is about being given a unique opportunity to understand who the person behind that music is, and to share for a brief time, her life on the road and be a part of that journey.'

Here's what you say about
Christene Ledoux - Little Lighthouse.