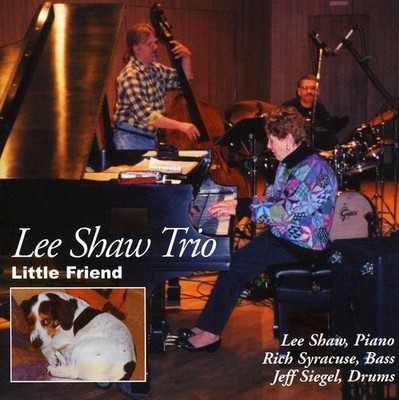 LEE SHAW PIANIST, COMPOSER/ARRANGER, BANDLEADER Lee Shaw was born in Ada, Oklahoma. She began studying piano at the age of five. After graduating from high school, she attended the Oklahoma College for Women where she earned her Bachelor of Music in Piano. She earned her Master's degree in piano at the American Conservatory of Music in Chicago. She also studied privately with concert pianist, Jesus Maria Sanroma in Puerto Rico. When she began playing piano in nightclubs in Chicago, she was sharing bills with the likes of Anita O'Day, Dinah Washington and Sarah Vaughan. It was the 1950s, and fresh out of the conservatory, she drew mostly on her classical background, her encyclopedic knowledge of popular songs and her uncanny ability to play in any key. On the job training and study with the great Oscar Peterson turned Shaw into the first-rate jazz pianist she later became. She has had her own trio for more than 40 years, during which time she has performed in clubs, concerts and festivals in the United States, Canada and Europe. Shaw, who has lived in the Albany region for the last three decades, has been a guest on Marian McPartland's NPR program "Piano Jazz" and appears frequently on WAMC's Roundtable. She was inducted into the Oklahoma Jazz Hall of Fame in 1993. She is also an inductee of the Alumni Hall of Fame from the college from which she graduated. The Lee Shaw Trio appeared at the Kennedy Center's Mary Lou Williams Festival in 1999 and will be appearing this coming June at the Saratoga Jazz Festival. In 2002, she was given an Honorary Doctorate by the College of Saint Rose. Shaw has been adjunct faculty at the College of Saint Rose since 1983 and also teaches privately. Among her most accomplished students is John Medeski, keyboardist with Medeski, Martin and Wood. ---------------- RICH SYRACUSE STRING BASSIST, ELECTRIC BASSIST, COMPOSER Rich Syracuse has been a mainstay on the New York area scene for more than two decades. For several years, he performed in the Nick Brignola Quartet playing clubs, festivals, and recording sessions. Besides his years with Brignola, he has performed with Mose Allison, Brubeck Brothers, Randy Brecker, Warren Bernhardt, Sumi Tonoka, David Torn, Mike DeMicco, Peter Levin, Sam Morrison, Jimmy Cobb, Bernard Purdy, Adam Nussbaum, Jeff Siegel, Eddie Henderson, Jeff 'Tain' Watts and several others. For the past 10 years, Rich has been the Bassist for Pianist Lee Shaw. He is the Adjunct Professor for String and Electric Bass Studies at Skidmore College in Saratoga, New York. Rich has toured throughout Europe and Southern Africa. As well as touring, Rich is an in demand Bassist throughout the northeast region of the USA. ------------------ JEFF 'SIEGE' SIEGEL DRUMMER, COMPOSER/ARRANGER Drummer Jeff "Siege" Siegel has performed and/or recorded with a diverse group of jazz artists ranging from veteran performers such as Kenny Burrell, Ron Carter, Benny Golson, Lee Shaw, Wadada Leo Smith, Jack DeJohnette, Baikida Carroll and Mose Allison to those a generation below such as Dave Douglas, Ravi Coltrane, Stefon Harris, Kurt Elling, Graham Haynes and Steve Turre. He was a member of the Sir Roland Hanna Trio from 1994-1999. He is the leader of The Jeff "Siege" Siegel Quartet. He has been described by Jazz World Magazine as a "brilliant drummer". His 2005 debut CD as a bandleader "Magical Spaces" on the CAP label was critically acclaimed by several publications including Cadence, All Music Guide, Jazz Improv, and several others. Veteran Jazz Artist Jimmy Heath recently noted ...'Jeff's musicality is incredible. He is so tasty as a percussionist and he has become a fine composer/arranger". A sampling of Siege's discography includes: Ryan Kisor's Minor Mutiny (Columbia) and Arthur Rhames Trio Live From Soundscape (DIW). Jeff is also on the faculties of S.U.N.Y. at New Paltz as well as Western Connecticut State University. He is an endorsing artist for Vic Firth Drumsticks.

Here's what you say about
Lee Shaw - Little Friend.