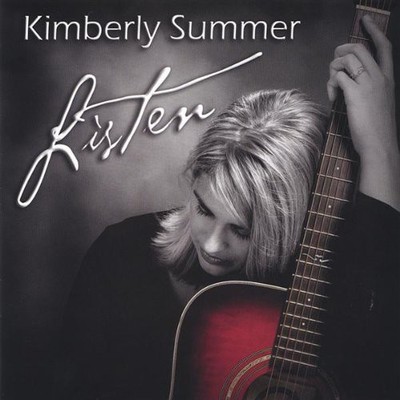 Kimberly Summer has established herself as an accomplished and rising singer-songwriter in the folk rock/pop rock genres. At first listen, Kimberly's voice is what takes in her listener. While Sarah McLachlan, Natalie Merchant, and Jewel comparisons are the most common, onstage Kimberly's voice is 100% original. As Melanie McGee puts it, "Kimberly's voice is her real ticket-it's a deep well with a full bucket of blues at the bottom." Beyond the voice, though, are Kimberly's multi-layered lyrics. Introspective and open-ended, Kimberly's words play out like a choose-your-own-ending novel. With songs of love, faith, failure, and dreams, there is no avenue her words do not explore. Kimberly's expansive collection of songs can be attributed to life experiences and nearly 9 years of stage experience. A Hoosier by birth, Kimberly left her hometown of West Lafayette, IN, for the beaches of St. Augustine, FL, when it came time for college. While earning an Honors degree at Flagler College, Kimberly gained precious writing material and honed her talents while amazingly keeping them hidden, choosing her audience to be the walls of her room. But after her first public appearance in 2000, Kimberly's music was then her life's passion. She began playing at every venue possible, and after recording her EP 'A Dreamer's Heart,' Kimberly took her act to the road in the summer of 2002 for three months of promotion. Her first tour, spanning 10 states, was a success, as Kimberly gained valuable stage experience, positive feedback, and the always memorable road trip adventures. After her marriage and a move from Florida to North Carolina, Kimberly's music was aching for studio time. So in May of 2005, Kimberly teamed with Asheville producer Chris Rosser and other Asheville based musicians, River Guerguerian and Joe Ebel, to complete her first full length CD, a 13 song production appropriately titled "Listen." "Listen" found it's way to the radio, to the hands of her fans, and most recently, to a variety of MTV shows, including "Made" and "Backstage Pass." Now relocated to St. Augustine, FL. Kimberly is excited to bring her music and her trademark red Alvarez guitar to a college town. In addition to playing as many venues as possible, Kimberly has plans to record another CD in the future.

Here's what you say about
Kimberly Summer - Listen.