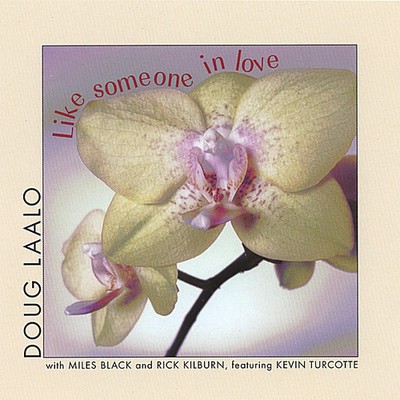 'Like Someone In Love' is Doug Laalo's second release and is reminiscent of the Chet Baker albums that were recorded for Lovers. This CD is intimate, romantic and great to listen to during those late night parties for two. Radio Feedback: 'I love your voice, Doug. This is a gorgeous album. Thanks for the opportunity to review and play it.' Helen Jarroe, Cairns 89.1FM, Queensland Australia. 'Give me a comfortable Sunday and Doug Laalo's CD, Like someone in love, and I have it made and don't forget a hot cup of chocolate. The music is great running from soft and sentious to uptempo and rhythmic. Listen as Doug takes on Rogers and Hart's Dancing on the Ceiling. I recommend this CD to you. Enjoy!' Leon Reyes KVMR Radio 89.5 FM Nevada City / Sacramento Ca. Host: Leon's Jazz In A Box. Alex Pijnen with BRTO Radio in the Netherlands writes: 'Fantastic album. Great stuff for our Radio Station.' Biography: When jazz great and Sinatra protégé, Kenny Colman first spotted Doug Laalo at Chardonnay's in the late 80s, he immediately pegged him as a musician and invited Laalo to sing a few numbers. Laalo recalls turning him down with a comment like 'Nah. I don't sing that stuff.' Few people would be fortunate enough to get a second invitation, but Laalo was. Ten years later, Colman saw him again at the Casbah Jazzbah and invited him on stage to do a song or two. This time, Laalo said yes. And evidently, he was good. Colman asked him to put a band together and do a whole show a few nights later. Thus began Doug Laalo's career as a jazz singer. What happened between Laalo's two encounters with Colman was Harry Connick Jr. Laalo had grown up on the music of Frank Sinatra, Dean Martin, Perry Como and the like, but he describes himself as having been 'sidetracked by the Beatles and the Stones. It was hearing Connick that inspired Laalo to return to the music he loved as a kid. He was drawn to the lyrics, which evoke the spectrum of emotions one experiences during the lifespan of a love affair. He also appreciated the precise melodies, which challenged him to grow as a vocalist. He began listening to a lot of Chet Baker, Tony Bennett and Frank Sinatra and refining his chops with voice teachers Steve Maddock, Jennifer Scott, and the renowned Russian vocal coach Nicolai Kolesnikov. He released his first CD, Why Do People Fall in Love, in 2001 and earned airplay on all the major CBC shows - Hot Air, After Hours, Disc Drive, etc. Three songs are still in regular rotation on Vancouver's 600 AM. Since then, he's performed with many of the key players from the 'Vancouver scene,' including Bill Coon, John Nolan, Ron Johnson and Rene Worst, and a few notable international figures like Keith Copeland, Dave Young and Jerry Bergonzi. Laalo's sophomore CD, Like Someone in Love, was released in the fall of 2006. It is an intimate and romantic collection of standards, reminiscent of a Chet Baker 'For Lovers' collection. In fact, all of the songs on the CD are numbers Baker recorded at one time or another, though Laalo carefully selected his favourites from among the lesser-known works. The repertoire includes several Rogers and Hart compositions, Hoagy Carmichael's 'I Get Along Without You Very Well,' and the Jerome Kern and Johnny Mercer number 'I'm Old Fashioned.' Laalo describes the song selections as capturing 'the arc of love: from the excitable to the sentimental.' One tune, Laalo's cover of 'While My Lady Sleeps,' was recorded as a tribute to his niece who died at birth. Laalo's straight-ahead approach to the material is reminiscent of Baker's, while his voice shares the gentle androgynous quality and slightly melancholy sound Baker was known for. Like Someone In Love was produced by renowned bass player Rick Kilburn (Mose Allison, Dave Brubek), who frequently played with Baker in the 70s; it features tasty trumpet licks from Kevin Turcotte and piano from Miles Black. Though Laalo may be a relative newcomer to jazz, music has been a big part of his life since he was a teenager. He began playing in rock bands while in high school and literally supported himself as an 'emancipated 17-year-old' by living in a band house with his buddies and playing gigs to pay the rent. He continued to play in rock and pop outfits throughout the 80s and 90s while simultaneously raising a family and building a career in the stereotypically 'un-crooner-like world' of the stainless steel industry. (Actually, Doug says he colleagues are enthusiastic about his music career!) He studied voice with Edwin Coppard of 'The Shockers' fame and earned national radio play in the late 80s as part of the group The Game, with Coppard and Marc LaFrance. More recently, he has performed around Vancouver as part of the classic rock ensembles The Beverly Brothers and the Dick Clark Five. Laalo, whose interest in politics led him to run for Vancouver City Council in the 70s under the COPE banner, became concerned about human rights issues around 9/11 and began involving the Dick Clark Five in Amnesty International benefits. Laalo describes his venture into jazz as one more opportunity to grow as an artist and performer. The opportunity to work with musicians like Kilburn and Black, he says, pushes him to keep getting better and better.

Here's what you say about
Doug Laalo - Like Someone in Love.