Or the Whale - Light Poles and Pines 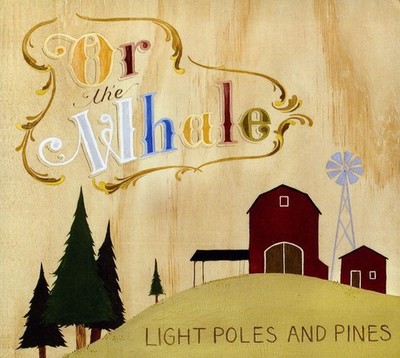 Or, The Whale is the band that if ever caught off guard by an onstage power outage would say, "Fuck it," pull in tighter, and play and sing harder and louder than you'd hoped for in the first place. Sure, the San Francisco-based band harbors seven members, so you could argue for strength in numbers. But writing off the impression that they inevitably leave isn't so easy; with such a diverse group of musicians, there's no shortage of skill and influence. Some members toured in punk bands, others played roots and funk music, and still another tested her pipes as a chamber music vocalist. At first glance, their histories seem random. But weave those experiences together and you get a sound you can feel. Or, The Whale's songs range from danceable, rhythm-charged country-rock ditties with swaggering bass lines and articulately stomped-out drums to indie pop-rock tunes with bopping piano, snapping drums, and loops of finger-plucked guitar that explode into electric riffs to add fuel to fervent vocals. Slow it down and throw in some four-part harmonies, vibrant organ passages, and rippling pedal steel, and songs escalate into thoughtful ballads. When it comes down to it Or, The Whale's music can fly spirited and boisterous or topple lonely and bereaved. Hell, sometimes it does all those things in one song. Stories of hope and longing emerge from soothing, stirring vocals and twangy rock instrumentation. The latest evidence of this is on their first full-length album, Light Poles and Pines. At times, Light Poles and Pines is omnipotent and epic ("Life and Death at Sea"), painfully reflective ("Rope Don't Break"), or both ("Fight Song"). On "Life and Death at Sea," defeated, raspy lead vocals sink under a whining pedal steel until pulled up by a rousing harmony. The two voices blend and are joined for a powerful chorus that valiantly leads the song back into the light of hope. And really, that's the secret behind Or, The Whale's draw: their songs are honest, intelligent, musically compelling reflections that act like the light off of a beacon, shining over the darkest, choppiest waters. -Melanie Roberts.

Here's what you say about
Or the Whale - Light Poles and Pines.