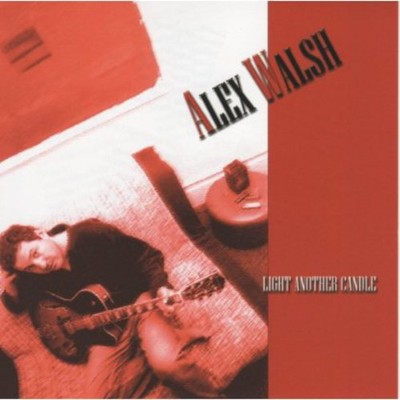 Alex Walsh hails from San Francisco where his jangly pop rock blues sound has local bookers buzzing about his new CD, 'Light Another Candle'. 'I got out of my car for about two hours after I'd listened to the first few songs,' says Diana Arnspiger from Bill Graham Presents.' When I got back in, the CD automatically came back on and I was thinking to myself, 'Hmmm, I wonder what band this is, this is a great tune', thinking I was listening to the radio. After it ended I sat there for a second expecting a DJ to tell me who it was when I realized it was still Alex's CD!!' After years of chasing that elusive record deal, Alex decided to follow in the footsteps of his idol Jimmy Page and learn how to produce himself. He began his journey in 1998 with a solo acoustic CD that he sold at his performances. Alex then put together a band project and went into the studio, but was not happy with the results. He broke up the band and started from scratch. 'I got a day job working at the local musicians union,' Says Alex,'And began to meet really great players. Eventually, I was inspired to try again.' Alex recorded twenty-one tunes over nine months at Patrick Simms Studios, located in the musicians union. Patrick played on many of the tunes, and eventually became a co-producer. Immediately after his CD release, Alex signed a music licensing deal with Lisa Klein at Optic Noise; a San Francisco based music licensing company that places songs in TV and Film. 'I picked up my CD's on a Thursday,' Says Alex,'Sent one to Lisa on Friday, got an email from her on Monday, and we shook hands on Tuesday. It happened that fast.' Lisa describes Alex's music as a cross between Elvis Costello, T. Rex, and The Replacements. Alex began the recording process by rehearsing with a rhythm section and then recording the trio live. He then brought musicians in to flesh out the sound. Twenty musicians contributed their talent including Joe Rodriguez on trumpet (who played in Elvis Presley's Vegas show), Tom Heimberg, violist for the San Francisco Opera, and Jeremy Cohen, violinist for the Turtle Island String Quartet, to name a few. The Alex Walsh Band is currently playing around the Bay Area to support the new CD and develop their audience. The band is planning a full West Coast tour early in 2004. Alex plays guitar and harmonica, and sings. Dana Kelly, a recent transplant from North Carolina, plays drums on the CD and at the shows. Kurt Ribak, a long time Bay Area resident, is handling bass duties. 'Light Another Candle' is available online at CDBaby.com, or at Amoeba Music and Street Light Records in San Francisco.

Here's what you say about
Alex Walsh - Light Another Candle.