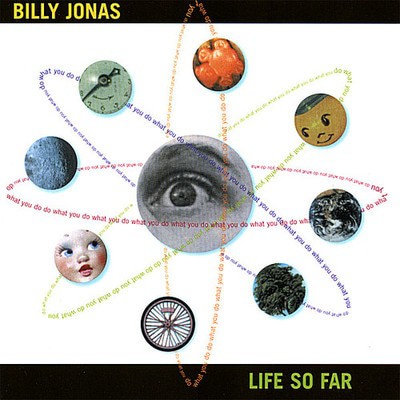 A Billy Jonas performance is an explosion of energy. In singalongs, bangalongs, whisperalongs, as well as improvised songs, his primary instrument is the audience. Everyone becomes part of a performance that reaches out and '. . . touches even the most hardened of hearts.' (Fayetteville Morning News) Concerts begin with a simple 'tuning' of the audience; from there a whimsical trajectory carries listeners through stories of life, love, and triumph over 'Murphy's Law.' Jonas' original pieces are played on fanciful 'industrial re-percussion' instruments made from found objects. He sings in a clear tenor voice; his guitar work is adventurous, alternately percussive and lyrical. Jonas' heartwarming work has been enjoyed across North America since 1987. Previously a member of the highly acclaimed duo, 'The Billy's,' he has been featured at prestigious festivals and venues nationwide (see selected venues). Jonas has shared stages with some of the world's favorite acoustic artists, including Patti Larkin, Ani DiFranco, David Wilcox, Richard Thompson, and Pete Seeger. Jonas' recent CD, 'Life So Far,' sparkles with unique perspectives and found sounds. Songs filled with hope, yearning, wonder, and wisdom include special guests David Wilcox, Glen Velez, Robert Moog (on Theremin), and Zimbabwe's Black Umfolosi voice and percussion choir. Jonas also has released a video for younger audiences, entitled 'Bangin' and Sangin,' that has garnered critical acclaim, including a Parents Choice Gold Award, and inclusion on the New York Times 'Best' listing. Billy Jonas' performances will inspire, inform, and enlighten. His work is born out of respect and reverence, and seeks to honor the creative energy in everyone. Billy provides performances and workshops for adult audiences and/or family audiences. Billy is accompanied by a full ensemble of singers and re-percussionists at larger venues.

Here's what you say about
Billy Jonas - Life So Far.