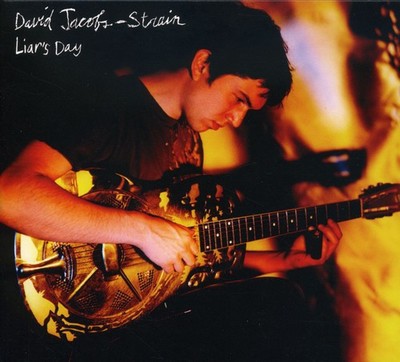 David Jacobs-Strain, a consummate finger-style and slide guitarist, plays in the blues tradition but isn't from it. You'll hear echoes of Skip James, Charlie Patton, Tommy Johnson, and a song or two by Fred McDowell or Robert Johnson in his solo performances. But as a modern roots musician, singer, and songwriter, "I come from the language of the country blues, but it's important not to silence other influences," he says. Upon listening to Jacobs-Strain's latest CD, Liar's Day, you can imagine him inviting his touchstone, American bluesman Taj Mahal, on a musical walkabout. You can imagine them conferring with Salif Keita, Afro-pop songster of Mali; and conversing with Vishwa Mohan Bhatt, Indian slide guitarist; and even conjuring the spirit of John Lennon while tramping in the Siskiyou Mountains of Oregon. The traces of these musical excursions interweave with the fat sounds of a rock rhythm section. The results cohere into a genre-defying journal of Jacob-Strain's pursuit to honor both the roots of American country blues and the possibilities that can grow from them. The mix of instruments and old-school analog effects on this album produce "a sonic palette that's neither just blues nor just rock and roll," Jacobs-Strain says. Liar's Day was produced by his mentor and collaborator, Kenny Passarelli (Otis Taylor, Stephen Stills), who's also featured on the bass. They're joined by Joe Vitale on drums. "I wanted a big, aggressive drum sound-a Neil Young or Tom Petty sound-that still allowed space for the Traugott acoustic and National steel guitars. I got it by working with Joe and Kenny, Joe Walsh's rhythm section in the '70s." His obsession with sound serves a deeper purpose than a mere desire to display technical wizardry. "For me, there's something about rural blues that has a transcendent quality, a wide open sound. Think of the rhythm of a train. There's a cross between spiritual and secular music in Fred McDowell. Compared to commercial electric blues, the Delta blues are more interesting modally and have a spiritual depth to them. You can also hear anger, humor, and empathy. I'm going after the texture, the tone and feel of that." "I've always been drawn to the trance-oriented, heavier, Delta blues-to the driving, passionate, raw, distraught sound of somebody like Son House," he says. "When you're in the flow of the music, there's an ecstasy to it. Of course, when I was 12, I thought I knew what Robert Johnson's 'Come on into My Kitchen' was all about." The 24 year old Jacobs-Strain has refined his youthful expression of raw energy, passion, and technique into powerful, nuanced performances like those captured on Liar's Day. He grew up in Eugene, Oregon, in a community that was centered on cultural change and environmentalism. He sees a distinct connection between the principles embodied in his upbringing and the democracy of the blues. "I'm really into hand-made culture-and real people making real music. The voice. One guitar. Even at their simplest, the blues have always been a vehicle for expressing your own situation, whether as an individual or a community. There's such power in that." For the past three years Jacobs-Strain has been touring the country to share his musical explorations with diverse audiences. He's been billed with T-Bone Burnett and Bob Weir, and has opened for acts such as Los Lobos, Lucinda Williams, Taj Mahal, Etta James, Boz Scaggs, and the Blind Boys of Alabama. By the time he was 19, he had played at the Philadelphia Folk Festival and MerleFest. His other festival credits include the Strawberry Music Festival, the Newport Folk Festival, the Telluride Blues Fest, the Vancouver Folk Festival, the Montreal Jazz Festival, and the Lugano Blues to Bop Festival in Switzerland. He's also served as faculty at guitar workshops, most notably at Jorma Kaukonen's Fur Peace Ranch. "How do you continue to find inspiration in sound? Why does a certain musical phrase grab you by the hair and heart and brain? How do you continue to make it new? How do you honor the people who poured themselves into the music in the first place?" Jacobs-Strain asks. Whenever he strives to answer these questions, you'll want to be there to listen.

Here's what you say about
David Jacobs-Strain - Liar's Day.