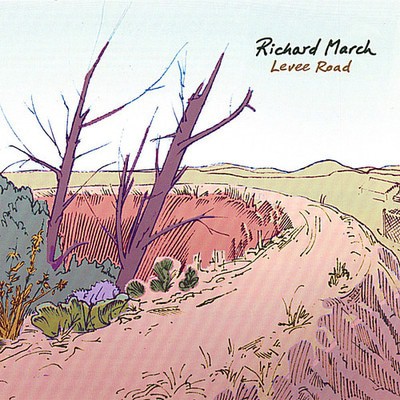 That young man can turn a phrase...he's a good 'un." -Ramblin' Jack Elliott Richard March, a tall, ebullient songwriter/storyteller is a modern day throwback to the melodic, progressive country music stars of several decades ago when folks like Mickey Newbury, Kris Kristofferson and Glenn Campbell were regularly heard on radio and seen on evening television. "...at the forefront of Sacramento's recent explosion of first-rate Americana acts. A homegrown John Hartford, with a firm grasp on American folk, bluegrass, the iconography of rolling boxcars, and Dylanesque political jeremiads, March at times sounds like a bluegrass Waylon." -Jackson Griffith, Sacramento News & Review. A San Francisco Bay area native who lived in Nashville, returned west and now lives in Sacramento, March should be considered a true California bard. A number of his songs, both on his new 2007 album, LEVEE ROAD ("High on a Mountain") and his 2004 release, THESE DREAMS, ("San Francisco") are paeans to his beloved Golden State. In the thirteen originals on LEVEE ROAD, March finds poetry in loss, beauty in recollections of innocence and mustered strength in memories and friendships. In the Byrdsy opening track "Goodbye," he sings "Now, I'm giving this the best of, Whatever is left when I'm done cryin' Thank you, I'm working out some old blues, Learning how to stay true, You helped me fly Each night when I close the door shut, I lift my hands up, and I pray your name Lord God, help me see the reasons, This dry season's begging rain. " With his well-worn Martin D-18 (and sometimes a harmonica rack), March goes a bit beyond new Americana strum and twang. He has clearly benefited from the reflective, compositional styles of John Prine and Paul Simon; the yearning, multi-layered folk-rock of Roger McGuinn; even the gentle, conscious country-rock of humanitarian John Denver. These influences are melded into Richard's distinctive voice and memorable melodies. March's long time band mates are brilliant guitarist Steve Randall (2006 Sacramento Music Awards winner for Best Guitarist), drummer Kevin "the Father" Priest and Tyler Ragle, his bassist/harmony vocalist. Coming from a family of Bay Area public school teachers, and growing up in the 1970s-1980s, March's love of language and respect for public service is apparent. His natural-born music is unabashed in countering shoe-gazing apathy and eye-rolling cynicism, whether in select lyrics or from his genial bully pulpit as host of the popular "Americana Ramble," a weekly Wednesday live music series at Marilyn's, the downtown Sacramento concert club. And he walks it like he talks it too, performing on Sacramento's "Air America" affiliate, at progressive political fundraisers or annual AIDS Walk benefits. March also counters the sad tradition of musicians being horrible dancers. He can come down off a stage, flash a smile and light up a dance floor. In the early 1990s, March studied voice, composition and musical theatre at San Francisco State University, joined the local coffeehouse and club scene, and became part of a thriving songwriter community that included other local favorites, Matt Nathanson, Noe Venable, Ben Graves and Box Set. He recorded two albums there, THE BRIDGE in 1994, and a self-titled disc in 1998. Both were well-received, garnering him showcase opportunities in radio personality/music promoter Bonnie Simmon's SFO1 Conference and the city-wide 'Making Waves Music Festival.' After a stint in Nashville, Richard relocated to Sacramento in 2001 where he grabbed the attention of local critics and music fans alike with his buoyant live shows and THESE DREAMS. March too, has won the praise of every one of the roots music legends he has opened for in 2006-from folk icon Ramblin' Jack Elliott, to rockabilly hero Lee Rocker to great bluesman/songwriter, Nick Gravenites. With LEVEE ROAD, March's poetic, lyrical journey of search, surrender and release has evolved; an uplifting, cohesive collection of smart songs sung true.

Here's what you say about
Richard March - Levee Road.