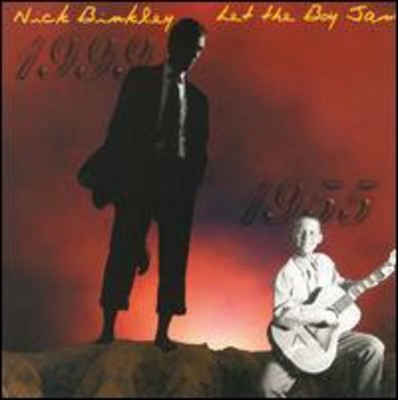 Four songs on 'Let The Boy Jam' were produced by well-known songwriter and musician, Steve Dudas, who also co-wrote two of the selections, 'In Her Room' and 'True Love.' Dudas, who played guitar in Chuck Berry's road band, recently finished work on Ringo Starr's album, 'Vertical Man.' The remaining tunes were produced by Binkley with music industry veteran Denny Bruce, who has produced albums by John Fahey, Leo Kottke, John Hiatt and The Fabulous Thunderbirds, among others, as well as Binkley's previous CD, 'Pin Stripe Brain,' released in 1996. Nick Binkley has been playing guitar, singing and writing songs for over 30 years. Over the last few decades, he has had his feet in two worlds. 'The album reflects the duality of my life in both music and business,' he says. 'Some of the new tunes like 'Wooden Indians' and 'Heart Attack,' along with the cover version of Ray Davies' 'Well Respected Man,' which lyrically mentions '...stocks and shares,' continue the theme established with 'Pin Stripe Brain.' 'I have no choice writing music,' Binkley continues. 'It's just something I do. The front cover of the new album portrays my suit-and-tie life in venture capital activities next to a picture of me at age 10, playing my first guitar.' In addition, Binkley has some unique thoughts about the current music media climate, in which radio and music television tend to concentrate on musicians and artists in the 20-40 age range, to the virtual exclusion of anyone over 40. 'My songs reflect a life experience that was incubated not in the music business, but on the 9-to-5 treadmill - in the real 9-to-5 pin stripe world,' he offers. 'So I come to it with a fresh and different perspective.' His 2nd CD features a new batch of Binkley-penned tunes, some co-written efforts and two cover tunes. In the period since the release of his first disc, 'Pin Stripe Brain,' Binkley has played his music all the way from local Southern California events to the Russiya Concert Hall in Moscow, Russia, and has written and recorded his new album, all the while continuing his investment banking business and setting up a structure to sign and nurture other artists.

Here's what you say about
Nick Binkley - Let the Boy Jam.