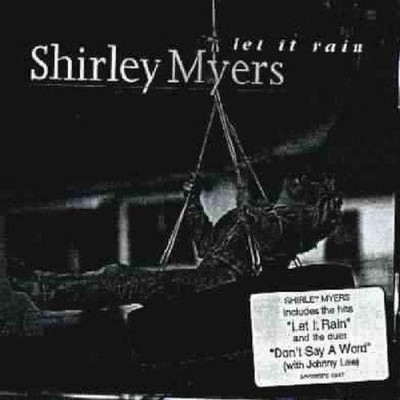 A Stony Plain Artist's bio Canada's 'country sweetheart' 'If Shania Twain is Canada's superstar, then Shirley Myers is Canada's sweetheart.' That's the opening line of a major feature story that ran in a Canadian country music magazine. And it's right, too. Only problem is, it doesn't go anywhere near far enough. It doesn't tell you how committed, how focused, how hard working this woman is. It doesn't tell you that, when she sings, there's real steel in her voice: the vocal edge that says 'This is a song I believe in, this may be a song that's sheer fun, but it's one that's important to me.' So, there's more to this open, friendly, beautiful, and warm-hearted woman than you'll see at first glance, but you'll hear it when she sings. And Shirley Myers comes by it honestly. Born and raised in New Brunswick, she first started to sing when she was three, sitting on her daddy's knee. By the time she was four she and her sister were on stages around the province. It helped, of course, that her father -- Gerry Myers -- was a well known country singer in Canada's Maritime provinces, and the star of The Bunkhouse Boys' television show in the '50's and '60s. As she grew up, she learned guitar, played drums, and honed a warm, emotion- laden voice. In 1988 she got her first big break - the Canadian Country Music Association's Talent Search with a $10,000 first prize. She toured, endlessly, throughout the Maritimes and various parts of Canada. She played on all the major Canadian music TV shows. Teaming up with fellow Maritimer, Peter Leggett, who was establishing a management firm in Nashville, was a turning point. Leggett opened every door he could in Nashville, and people began to take notice. Suddenly there were opening slots for George Jones, Terri Clark, John Michael Montgomery and Tracy Lawrence. The next big break was her title song Let It Rain -- it turned into a Top 10 record, and was one of the most-played songs on country radio in Canada in 1997 earning her a Juno nomination.

Here's what you say about
Shirley Myers - Let It Rain.