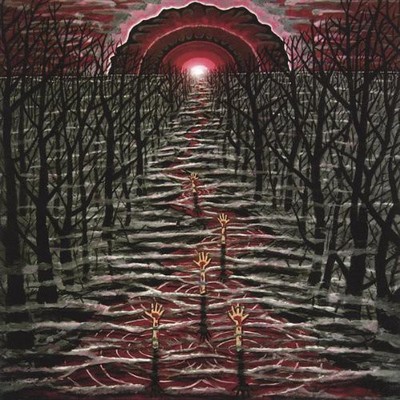 GOLLUM - review highlights and excerpts 'Super-ultra-mega complex in structure and style, this one takes a few listens to grasp but once it takes root, may never grow old. Equally as tortured and biomechanical as it is free-flowing and organic... rapes ears with a low-end gut-punch that's almost entirely instrumental outside of it's haunting samples and guest appearances...Gollum have coughed up a wholly satisfying 46-minute release filled with chugging low-end sub-death metal, paranoid post-doom and apocalyptic melody. Get this.' - Dave Brenner, Metal Maniacs Jan 05 issue. 'I have been listening to Gollum all this week and I have to say this shit kicks ass my man! This is a great album and I couldn't be more behind it!!! It is total sick...this shit destroys!!' - Steve Austin, Today is the Day 'Conceptually and musically, Gollum have captured a true individuality and originality that through their trance inducing surrealist atmospherics, move them far beyond the planes of space and time. An original entity all to themselves, Gollum should be highly praised for their effort in pushing their artistic talent and creativity to acheive something great and lasting such as this. Lesser Traveled Waters is highly recommended.' - Jeramy Ponder, Jackal Blaster. 'Gollum's Lesser Traveled Waters might just be one of the most unique metal CD's I have heard in quite some time. Sort of like a weird combination of death metal, stoner/doom metal, thrash, and a dose of psychedelic prog, the four fellows in this North Carolina band certainly get major points for doing something different, as the eleven tracks here of mostly instrumental brutality are chock full of more killer guitar riffs and grooves than most bands with twice the track record can muster' - Pete Pardo, Sea Of Tranquility. '...What Gollum does well is combine copious amounts of riffage with synth, programming, and samples that move swiftly through the bloodstream. Hunter Holland's drumming pulverizes with foot speed and induces seizures with the fervor of an octopus on speed...we're beginning to see groups like Gollum retaining the heaviness but pushing the boundaries of the genre...Gollum deftly keeps the album sounding like extreme metal with groove and heft, yet pulls together an interesting mosaic of sounds that sets them apart from both the more traditional metal and noise core packs - not an easy thing to do and I applaud them for it. These waters are indeed lesser traveled.' - Scott, Live4Metal. '...Lesser Traveled Waters is the band's new release and is one of the most original metal records composed in a long time...Gollum are one of those bands that takes from all kinds of metal (black, death, doom, thrash, industrial, classic prog, you name it), and mix it tastefully into a creepy concoction that is more impressive than any other genre-jumping band...' - Velcro Lewis, StonerRock.com '...intense and mindblowing...damn heavy and the sound samples of Josh send me right into space...damn drugs. You like it hard, technical and not so fast...a bit in the vein of Neurosis...you will worship 'Lesser Traveled Waters' - Ralf Burkart, Dare Devil Magazine (Germany) '...Murderously heavy riffs collide with short blast beats, a serious ton of groove...Something a little more unique than what other bands are doing these days. And that's a rarity.' - Tom Wren, Metal Nightmare 'Tech fans, this is the one to get. Stoner fans, this is the one to get. Black fans, this is one to experiment with successfully. Really, Gollum should call Relapse Records immediately, because they would fit in perfectly with their technical, groundbreaking line-up of Mastodon, Cephalic Carnage, Suffocation, Neurosis, Dysrhythmia, etc. As artistic a release in the metal genre as I can remember in recent years, Lesser Traveled Waters is probably going to end up one of the most aptly titled metal albums of the year, in addition to one of the best.' - Ladd Everitt, Transcending the Mundane '... hard-pressed to cubby-hole into a neatly fitting genre. Heavy bottom bass and concussive drums wrapped around a crunchy guitar center lightly sprinkled with blip-blop sampling...Vocals (non-sampled I should qualify) are sparse and frankly I am glad to see it - the arrangements here are more than strong enough to stand on their own... I can't fully catalogue the flavors you'll find within but they are diverse and comprehensive as the likes of old TAD and stoneresque in the tradition of Fu-manchu with the mind-bending of Scratch Acid and Acid Bath. All without sacrificing a relentless heaviness or feeling obligated to dress it up in faster rhythms...I'd recommend this hands-down as a must have album - if for no other reason than to immerse yourself in a definition shattering world where heavy is not as heavy DOES, but just IS. Easily the best new band I have been exposed to in the last couple years. I hope these guys stick around as I'll eagerly be awaiting more material while thankful 'Lesser Traveled Waters' just refuses to get old.' - Matt Brammer, 1340mag.com 'Gollum might be the world's first stoner rock-black metal band...the constantly churning soundscapes of 'Lesser Traveled Waters' is like some kinda heavy rock buffet, as trance-y acid-doom passages give way to vicious Slayer riffs and a demonic rasp, which eventually collapse into King Diamond-esque unearthly choirs, and back again. It's quite mad, no doubt about it... it pretty much never gets boring. Largely instrumental...with a few episodes of devil-barking and a smattering of vocal samples to liven things up... total mind-movie music, perfect for dustheads and schizophrenics...certainly the stoner-prog dudes and the black metal cellar dwellars'll eat it up. And hell, what with the creepy oil paintings and pseudo-satanic gibberish, it might even throw a few parents into a tizzy...' - Sleazegrinder.

Here's what you say about
Gollum - Lesser Traveled Waters.