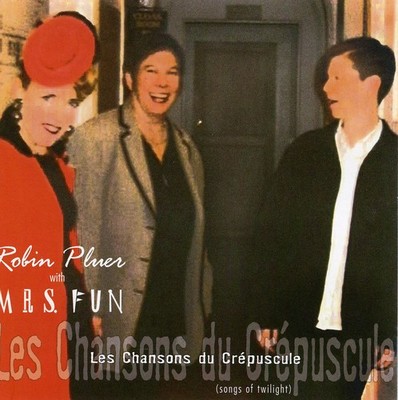 Robin Pluer joins forces with MRS.FUN to perform a passionate melange of vintage French chansons with a twist of je ne sais quoi. Robin Pluer, a perennial WAMI (Wisconsin Area Music Industry) Award winner, has been once again awarded Milwaukee's Best Female Vocalist by the Shepherd Express for an unprecedented third year. This chanteuse with panache has become a mainstay at Bastille Days festivals. Over the past 20 years Robin has performed and composed music with John Sieger (R&B Cadets), Paul Cebar (and the Milwaukeeans) and Peter Buffett. Her fresh, engaging talent has afforded her opportunities coast to coast including Garrison Keeler's 'Prairie Home Companion' and NPR's 'World CafÃ©.' Recently, Pluer has returned from touring Europe. Wherever she performs, whether it's her funky R&B or flirtatious medley of French 'oldies,' Robin Pluer effortlessly captivates her audiences. She can transport you to a more genteel France through chansons of the past, or strike your inner musical soul with her original R&B style. MRS. FUN plays hardcore electra-acid-jazz. Complex, sophisticated and adventurous, their music is a provocative blend of off-center jazz, ulta-funk, spoken word rap, and their own brand of neo-cabaret. Intelligent lyrics, flawless musicianship, and a dynamic stage presence are hallmarks of their music. The MRS. FUN sound is derived from Connie Grauer's funky bass-driven keyboard playing, combined with Kim Zick's aggressive in-the-pocket drumming. ' Grauer is a piano player with few equals in this town whose drive and energy spills across the stage and into the audience like nitrous oxide. She's got a left hand that doesn't quit, the mark of any great pianist, and a right hand with limitless boundaries'. Zick holds court as a 'heart-stopping drummer' whose 'grooves get so far out, most people need a map to get back.' Voted Best Contemporary Jazz Group by the Wisconsin Area Music Industry (WAMI) three consecutive years, Grauer and Zick have also received WAMI awards for Best Instrumentalist: keyboards and drums. Grauer has also received awards for Best Female Vocalist and Best Stage Entertainer. Grauer and Zick are from Les Paul's hometown Waukesha,WI. They began MRS. FUN in Nashville,TN, where they attracted the attention of many music industry insiders. Veteran producer Jim Rooney produced their first recording Lulu's Walk, which the band released on their own label FunTime Records. After MRS. FUN relocated to Milwaukee,WI, they collaborated with Violent Femmes drummer Victor DeLorenzo on several of his solo recordings. At this time, they released their second recording, They Are Not A Trio (FunTime). During their Nashville period, Grauer and Zick met k.d. lang, who invited them to record on Cole Porter's 'So In Love,' her contribution to Red, Hot + Blue (Chrysalis). Their collaborations continued with lang joining MRS. FUN on their compositions 'Lulu's Lament' (They Are Not A Trio) and 'Daughtera' (NO ENNUI) Lang's 1997 release Drag (Sire) features MRS. FUN on the Jane Siberry composition 'Haint it Funny.' While in Nashville, MRS. FUN also met the Indigo Girls, who invited them into the studio to provide the basic tracks on the song 'Dead Man's Hill,' (Swamp Ophelia-Epic). They reciprocated by adding clever background vocal tracks for MRS. FUN'S 'Gossip' (NO ENNUI). NO ENNUI, the band's third recording, showcases the ultimate in funk-driven tracks. Moe Tucker, drummer for the Velvet Underground, chose NOENNUI as one of her top 10 favorite recordings of 1995 (THE SAN FRANSICO BAY GUARDIAN). Released just a few months before NO ENNUI, Grauer's solo recording of original piano compositions Short Stories (FunTime) reflects the classical talents of this multi-dimensional artist. In 1997, MRS. FUN was invited to record a track on the EMI-Capitol tribute to Bruce Springsteen, One Step Up/Two Steps Back. GROOVE, the band's fourth recording features nine tracks ranging from the orchestrated funk of 'Repetition of Life' to the grand-piano and brush-drum ballad 'What's Left.' MRS. FUN truly captures the excitement of their live performances on this recording. In 1999, MRS. FUN released The Best of MRS. FUN (Daemon Records) and CHRISTMRS. FUN (FunTime), featuring holiday classics in the MRS. FUN style. FUNSVILLE (Daemon Records), the band's most recent release, features the 'jam band' side of MRS. FUN. The music for FUNSVILLE was recorded in one afternoon, totally improvised with no preconceived structure of key signatures, time signatures or chord progressions. This recording rocks! MRS. FUN has played select festivals and concert halls in the U.S. and Canada. They have shared the stage with Bela Fleck and the Flecktones, John Schofield, Billy Cobham, k.d. lang, Arlo Guthrie, Robert Cray, Janis Ian,Violent Femmes, and the Indigo Girls, appeared at the 'Women in View' Festival with Jane Siberry in Vancouver, and headlined programs at Ohio's Wexner Center for the Arts and the Arts Festival of Atlanta. In addition, they are annual headliners at Milwaukee's Summerfest. They have showcased at both the South By Southwest Music Conference in Austin, Texas, the North By Northeast Music Conference in Toronto, and the Winnipeg Folk Festival. They have also appeared on Canadian Broadcasting Corporation's 'Pilot 1' television program and on Wisconsin Public Television. DISCOGRAPHY.