Laura Powers - Legends of the Goddess 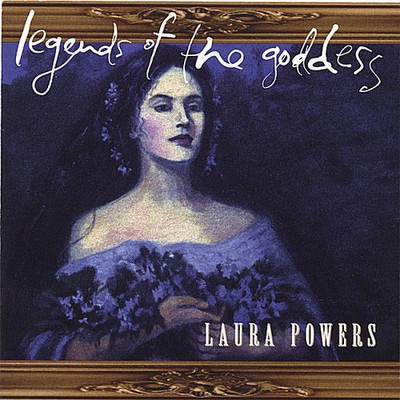 'Legends of the Goddess' is the first CD in a three volume collection ('The Goddess Series') which feature musical themes based on the Celtic Goddess of ancient myth. Laura Powers' fascination and extensive research in Celtic mythology, combined with her talent as a singer/songwriter, and her lifelong love of painting led her to the creation of this project. The music, enhanced by instrumentation such as tin whistle, uilleann pipes and Irish flute, melds with the lyrical imagery and her oil paintings, to present a timeless collection of music and art. 'This has been a work in progress for some time,' says Powers, who adds that, when she conceived the project, 'I was thinking partially in terms of the kind of music that I'd like to paint to, because when I paint I'm on a different level of awareness, and I wanted songs that would help take me--and the listener--to that level.' From songs like the mythical 'Goddess of the Sea Mist' to 'Answer Me With Silence,' her music captures the heart and soothes the spirit. In addition to her background as a live performer, Powers' craftsmanship as a songwriter has made a name for herself in the music and film industries. Her songs have been covered by numerous recording artists, and is reaching an international audience with her songs recorded in French and Spanish. Powers, who first began songwriting in her late teens says, 'I'm big on melody, beautiful harmonies and layered voices, as well as the time-honored classic structure of pop songs.' Musically, the influence of European pop can be heard throughout the records, and lyrically, it is the metaphysical/mythological aspect of Legends that is the central focus. The songs from the first CD 'Legends of the Goddess' are full of ancient Celtic references, including 'Tir Na Nog (Land of the Ever Young) a Celtic/Euro-pop reverie about the mystical land of the Ever Young; 'Samhain Madrigal,' which heralds the coming of the Celtic 'season of darkness'; 'Circle of Stone,' a majestic look at Stonehenge and the feeling of deja vu at having been there before; and 'Morrighan's Quest,' an ode to the lusty, boisterous Celtic goddess of battles. The first album ends, appropriately, with 'Song of One.' 'I wanted a song to hold the album together,' says Powers. 'This song speaks of the oneness of all people everywhere. I felt that was a good place to sign off.' What the reviewers said: Magical Blend: 'The music is a powerful and haunting blend of Celtic rhythms, containing fiddle, mandolin, guitar, Irish flute, accordion and Uilleann pipes. Laura Powers has a magnificent voice and will soon be listed among such singers as Loreena McKennitt, Mary Black and Enya'-John Osborne New Age Retailer: 'Powers sings with passion and conviction, her strong voice ringing out like the goddess she sings of. A delightful discovery, 'Legends of the Goddess' is a terrific first effort by a talented new artist.'-Steve Ryals.

Here's what you say about
Laura Powers - Legends of the Goddess.