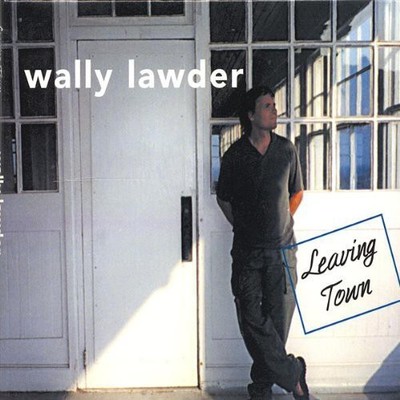 "Leaving Town" is the first of Wally Lawder's 3 CDs, recorded on the east coast in 2001 before he moved to New Mexico. 'It made sense to finally put out this CD--a lot of people had been asking for it.' His lyrics cover a wide range, from the romantic ('Mercies of the Night') to meditative ('The One Inside') to environmental/social ('The Indian in the Woods', 'Willow Street Belle') to rambunctious ('Things in Between'). Using his acoustic folk-pop style, this album has a very creative range, full of surprises, from the jazzy 'Sundress' to the dreamy 'Leaving Town' to the orchestral 'Something's Happening.' On this CD, he plays with a full, diverse ensemble of musicians. Bio: Wally Lawder is a Kansan-born New Englander who now lives in Silver City, New Mexico. A talented singer-songwriter with a loyal following, he likes to think of himself as a contemporary troubador. 'It's hard for me to categorize my music--I've had so many far ranging influences. My roots are as much in rock/pop as folk, and I've got a big appreciation for jazz and world music.' A musician for many years, he didn't start writing his own material until the mid 1990's, when he found himself energized by the contemporary singer-songwriter boom. 'I really took a liking to performers like John Gorka, Ellis Paul, Patty Larkin, Susan Werner, Bruce Cockburn. I could relate so much to their songwriting and was inspired to write my own.' Some of his earliest musical memories come from his exposure to the music that was played in his home as he was growing up: rockabilly, classical, jazz, early folk ('It was a curious but fascinating mix, and I think it helped shape my eclectic style.') Wally's real musical awakening came later with the Beatles, and that inspired him to buy his first guitar. Other early musical influences included Mississipi John Hurt, Cat Stevens, Joni Mitchell, Bob Dylan, Neil Young, Gordon Lightfoot, James Taylor, Jackson Browne and Paul Winter. His songs, sung in a resonant baritone, mostly come from direct life experiences and observations. He's a natural storyteller and has a way of drawing audiences into his stories. He can be very funny yet touch serious topics deftly. While he sings about a wide spectrum of experience, overall his message is upbeat and life affirming. Live, he often plays solo, or with his backing band, the Flying Coyotes.

Here's what you say about
Wally Lawder - Leaving Town.