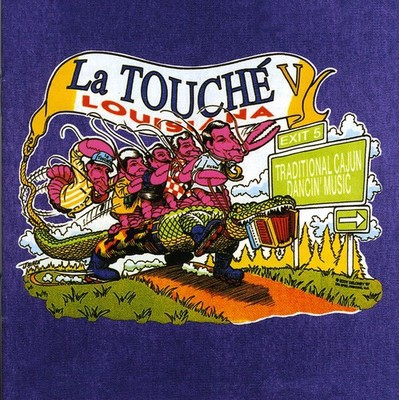 Latouche' is: 5-piece band playing Traditional style Cajun music and original progressive cajun music. La Touché was started in April 1987 by Wilson Touchet. WILSON TOUCHET - BAND LEADER, ACCORDIAN PLAYER, was raised in the cajun parish of St. Martin, La., on a farm producing mostly cotton & Cayenne Pepper. His dad was a sharecropper and moved several times in Cypress Island and Breaux Bridge La. Wilson spoke only Cajun French until he started school and learned English. He was raised around cajun music. JEROME THOMASSE, is from Port Allen, La.. He has performed with other bands before playing with Latouche'. He is a singer and song writer. CALVIN GAUDIN, DRUMMER, is from New Orleans, La. He has been with Wilson & Latouche' the longest. Calvin also plays Rub-Board and Triangle on our Acoustic Gigs. EDDY DELONEY, GUITAR, is from New Orleans via Shreveport, La. He has written songs for 2 Latouche' recordings and handles most band business matters. Gil Giroir, FIDDLE PLAYER, Is from Morgan City, La. And has performed in several Popular bands over the years. Latouche' has performed at the John Anson Ford Theater in Hollywood, Ca., on river boats in New Orleans, the University of Miami, Blossom Music Center in Akron, Ohio for MCA Records, Walker, Minn., Grand Portage, Minn. Other places include Michaul's Restaurant and Mulate's Restaurant in New Orleans. New Year's Eve Public Street Party in Mobile, Al. and the Internatonal Celtic Festival in Glasgow, Scotland.We also can provide you with your own Cajun fest with bands dancers and food. La TOUCHE' now has 5 CD's available in the U.S.A. and a release in the United Kingdom.

Here's what you say about
Latouch - Louisiana.