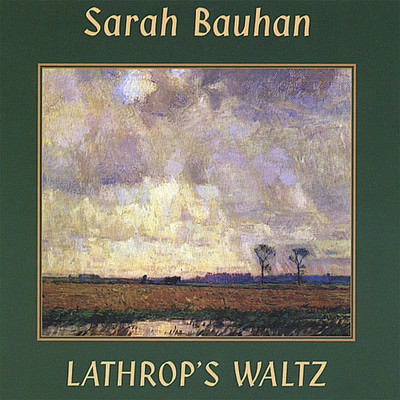 Music is an intimate art form for Sarah Bauhan, who brings together family and long-time friends to share in performances and recordings, and pens waltzes, laments, reels and the like in honor of people who are dear to her. That's no surprise, as the traditional music she plays on whistle and flute shares her Celtic and New England roots. Born and raised in the Monadnock Region of New Hampshire and with strong ties to her mother's native Scotland, Sarah picked up the tin whistle at the age of 12. Within two years she was performing at contra dances with Dudley Laufman's Canterbury Country Dance Orchestra. In addition to Laufman, who is credited with a contra dance revival in southwest New Hampshire, Sarah was influenced by her godfather, Newt Tolman, a flute player and writer, and by Bob McQuillen, a piano player and composer who in 2002 was named a National Heritage Fellow. In 1987, while performing at Pete Seeger's Clearwater Festival in New York, Sarah fell in love with, and soon came to own, a wood concert flute made in 1912 by the Wm. S. Haynes Flute Company of Boston. She added to that instrument a collection of fine wood and silver whistles made by Chris Abell of Asheville, N.C., adding both depth and scope to her repertoire of music. Sarah has released four solo albums, including three on her own label, Whistler's Music: the 1991 "Chasing the New Moon," the 1999 "Broad Waters," and the 2007 "Lathrop's Waltz." "The Untamed Grasses" came out in 1993 on the Alcazar label, and was re-released in 2008 on the Alula label. In addition to recording, Sarah performs at festivals, concerts, and dances, and has taught whistle and flute to children and adults at dance camps, in schools, and in workshops. Her performance options range from a simple duo with a guitarist or pianist to a multi-piece band with fiddle, guitar, bass, and piano and vocals.

Here's what you say about
Sarah Bauhan - Lathrop's Waltz.