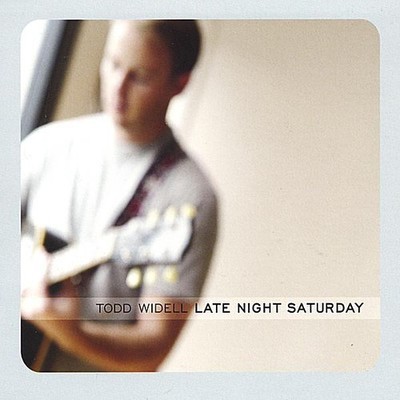 '..It sounds as great on a Sunday morning as it does when I'm flying down the freeway. With enough hooks to sing along with, but no simplistic song structures, LATE NIGHT SATURDAY is the best album you haven't heard of yet.' -Hilary, 91X dj, San Diego 'This is what radio rock should sound like. Think rootsy meets lei and gets ripped by an acoustic guitar. Jack Johnson would be proud of a record like this, though it's not tropical. Widell takes the big city studio apartment vibe and translates it into a coffee shop atmosphere..This guy is pure gold, and LATE NIGHT SATURDAY is showing up in my rotation week after week. Todd Widell is one guy I'd dig even if he got big!' -THE BLACK AND WHITE 'Todd Widell has that quasi-funky patio party sound down pat. Bringing to mind musicians like Dave Matthews and John Mayer, both of whom swear by the acoustic guitar, Widell nails relaxation at it's core..' -FMSound.net '..This is radio-tailored folk-rock that, whether by way of ability or sheer charisma, is a cut above it's contemporaries.' - Allan Harrison, Splendidezine Todd Widell grew up in San Antonio, Texas, but he was soon lured to the breezy, mild weather of Southern California. Working nights and having days free at the beach was his initial inspiration for songwriting. Eventually, he returned to school at the University of California, Santa Barbara, where he earned a degree in Film. After stints at motion picture studios, ad. agencies, and MTV, Widell left to dedicate himself to music full-time. Working with talented musicians such as Chili Charles (Ben Harper, Daniel Lanois, Brian Wilson) and Evan Calbi (Los Desnudos, Kufu), he completed his first full-length album, Late Night Saturday. Tunes from the debut release have been played at over 90 college/AAA stations in the U.S. and Canada, and charted as high as #4 on the east coast. Late Night...also appeared on cdbaby's 'Top Sellers List' and the single 'But Lately' made it's commercial debut on 91x's 'The Detour.' Widell's recent addition to the awarestore.com catalogue is the latest testimony to his talent. Incorporating upright bass, slide, acoustic, and electric guitar, keyboards, and jazz-influenced drum techniques, Widell's music blends folk rock with hints of country, blues, and an americana vibe. Much of this sound stems from musical influences in his youth, but the largest impact was listening to his father strum the likes of James Taylor, Paul Simon, and Willie Nelson. Featured on the album are Evan Calbi and Chili Charles. Chili has performed with everyone from Ringo Starr to Taj Mahal, and you may recognize him from Ben Harper's latest video, 'In My Own Two Hands,' as Chili's son, Oliver, is the drummer/keyboardist for Ben Harper. Learn more about Chili at mp3.com Evan Calbi played upright, electric bass, and slide guitar on LATE NIGHT SATURDAY, and his amazing talents are evident on all tracks. Evan currently plays with the instrumental group, Los Desnudos, and has composed various solo projects as well.

Here's what you say about
Todd Widell - Late Night Saturday.