Xochimoki - Land of the Feathered Serpent 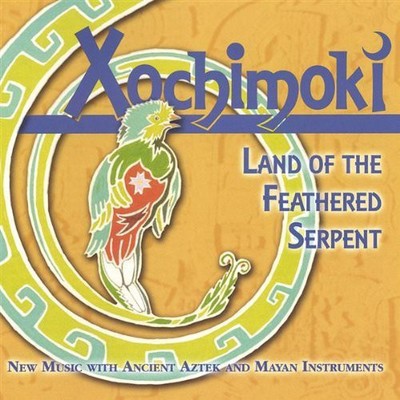 ABOUT THE CD: Xochimoki's new CD, 'Land of the Feathered Serpent' has been compiled from the best of their recordings in the 1980's, previously only available on cassette. It also includes music that was created for an animated film by Patricia Amlin entitled 'Popol Vuh - The Creation Myth of the Maya' (1990) that has aired many times on PBS. All of the music has been re-edited and digitally remastered, and some here-to-fore unreleased music is also part of this release. The CD, booklet, and covers are illustrated with original artwork based on pre-Columbian motifs. The highly informative booklet is in both English and Spanish, and includes a Nahuatl and Mayan glossary of terms . Titles of various tracks on the CD refer to ancient Mayan ceremonial centers, sacred Aztek volcanoes, cosmologies and cultural traditions of the native peoples of Mesoamerica. The music was inspired through the living experience of connection to these cultural/spiritual roots. The CD is produced and distributed by Hu Ra Records, specializing in Neo-Ancient Music. ABOUT THE MUSICIANS: Xochimoki is a unique musical duo devoted to the revival of ancient arts and knowledge through contemporary creative expression. It was founded by Jim Berenholtz of North America and Mazatl Galindo of Mexico in 1984 with the specific focus of making original music using the pre-Columbian instruments of the Aztek, Maya, Toltek, Zapotek and other Mesoamerican civilizations. Since that time Xochimoki has brought the sounds of these nearly forgotten musical instruments to millions of people throughout the world. The name 'Xochimoki' (pronounced SO-CHEE-MO-KEE) is derived from the Nahuatl and Hopi languages, and translates as 'Flower of the Ancient Ones'. It symbolizes their intention to reactivate cultural and spiritual sharing between the peoples of North and South, especially North and Latin Americans, indigenous and non-indigenous. This is reflected in the fact that Mazatl and Jim come from exactly such distinct backgrounds. Aside from their recordings, Xochimoki is best known for their concerts where they perform with over one hundred ancient wind and percussion instruments. In these shows they attire themselves with very colorful, traditional native garments, feathers, shells, etc., and often also include body paint, masks, dance, slide projections and incense. The total effect is a multi-media feast for the senses. Xochimoki has been seen at major museums, universities, theatres, cultural centers, and Indian reservations throughout the United States, Canada and Mexico, receiving both critical and popular acclaim. They have also appeared together at venues in Central and South America, Europe, Africa and Polynesia. Performances and interviews about their music have been aired on major network and public television, including the CBS Sunday Morning Show with Charles Kurault. And they've been the subject of numerous radio specials with such reknowned hosts as Studs Terkel. In addition to their audio recordings, Xochimoki has produced soundtracks for many museum exhibitions, including for Mexico City's famous Museum of Anthropology and History, the Los Angeles County Museum of Natural History, as well as for the largest touring exhibit of Mayan art ever assembled, 'MAYA: Treasures of an Ancient Civilization', which premiered at the American Museum of Natural History in New York City. Xochimoki has also created numerous soundtracks for films and documentaries that have been aired on PBS, HBO, etc. And they've created the music for many theatre and dance productions, most recently the 'Temple of the Cosmic Serpent' which premiered in Hollywood in 2003. Since 1991 Xochimoki has had a very special association with the Los Angeles Music Center as ethnomusicologists and world musicians. For seven years they were one the center's most popular touring groups, performing two distinct shows for school children, 'Journey through the Americas' and 'Sounds of the Rainforest'. These shows, which were often done bilingually (English/Spanish), were performed to the delight of hundreds of thousands of young people throughout Southern California. For many years Xochimoki also performed programs in the schools through the Orange County Performing Arts Center. After a hiatus of seven years, Xochimoki is back with the Los Angeles Music Center on Tour program with a new show on the music of indigenous people. This show is performed with a wide array of exotic wind and percussion instruments from around the world, including turtle shell drums, conch shell trumpets, intricately carved and painted log drums, ceramic ocarinas, panpipes, and giant bamboo flutes. The instruments come from regions as diverse as the Alaskan tundra, the Amazon rainforest, the African savannah, the Himalayas of Tibet, and the jungles of New Guinea. Kicking off Xochimoki's return in spring, 2004 was their appearance at the Music Center's brand new, architecturally and acoustically phenomenal Walt Disney Concert Hall in the heart of downtown Los Angeles. Xochimoki had the distinguished honor of being among the first group of world musicians to ever perform on that stage. Despite five centuries of brutal repression towards indigenous cultures since the European invasion of the Americas, the authentic music and spirituality of the Western Hemisphere still survives. Xochimoki is grateful for the opportunity to participate in a cultural renaissance that honors the ancestors and all living things. They give thanks to every animal, plant and tree whose bodies went into the making of the instruments they perform with, and they pray through their music that this offering brings more life and love to the Earth. Xochimoki invites you to experience the beauty and wisdom of ancient and native cultures with open ears, mind and heart. Enter the world of Xochimoki, and awaken your memory to the future.

Here's what you say about
Xochimoki - Land of the Feathered Serpent.