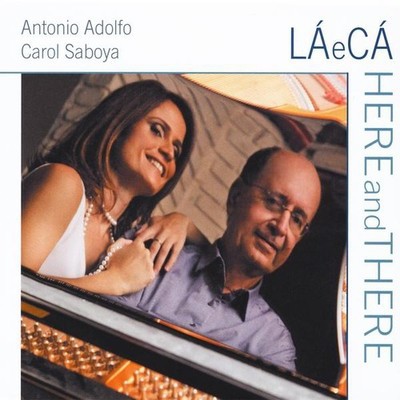 This new CD picks up where we left off with the critically acclaimed 2007 release, Antonio Adolfo and Carol Saboya Ao Vivo/Live. Last year, after our performance at the Jazz Impression Concert presented by South Florida Jazz at the Rose & Alfred Miniaci Performing Arts Center, Carol and I came up with the idea of recording something similar to what we had presented there with a quartet before a wonderful audience. The song list was based on the 2007 CD and included some tunes that appear on this Lá e Cá/Here and There CD. Then, during my visit to Rio in December 2009, we went into a studio and recorded the songs for the new CD with several great Brazilian musicians as if we were performing live. I feel that's the very best way to play music, and that's what we've done on Lá e Cá. On the other hand, during recent years I've been focusing my work on phrasing, especially Brazilian phrasing, and it has become a passion and even a teaching subject during classes with my music students. Here are the songs featured on the new CD: Cascavel ("rattlesnake") is a song I composed in 1974. Since then it has been played and performed by many different musicians. All the Things You Are is a lovely song that I normally use as one of the first examples in my classes on how to phrase in a Brazilian way. It carries a very rich and seductive combination of harmony and melody and can become very Brazilian if we apply certain phrasing techniques. This tune has inspired other Brazilian composers to write melodies based on a very similar harmony. Minor Chord is one of my most recent compositions-written less than a year ago-and it has only minor chords. I'd never written a song with only minor chords before. But, as you can hear, "minor chord" doesn't necessarily mean sad chord or sad music. A Night in Tunisia - Since I started playing jazz, when I was 17 years, this song has captivated me, perhaps because of the terrific combination of jazz and Latin that composer Dizzy Gillespie created. Time After Time - The Chet Baker recording of this song enthralled me-and many other Brazilian musicians and composers-during the 1950s/60s. It is safe to say that his vocal interpretations (including the one for "Time After Time") have influenced an entire generation of musicians in Rio/Brazil who, at that time, invented one of the most important Brazilian musical styles: the famous Bossa Nova. Easy to Love - Cole Porter was also one of the most important composers of all times, admired by, among others, Antonio Carlos Jobim. I, too, am a passionate admirer of Cole Porter's music. Our interpretation of "Easy to Love" recalls the sound of what we used to play in the nightclubs of the Beco das Garrafas (Bottles' Alley) in Rio, where Brazilian musicians got together to play and discuss jazz during the 50s/60s period. Sabiá - The only track with a song exclusively by other Brazilian composers (Antonio Carlos Jobim and Chico Buarque), "Sabiá" is an example of the beauty found in Brazilian music, not necessarily just Bossa Nova. The original lyrics are so beautiful and talk about saudade, a feeling of loneliness and mixture of happiness and sadness found in many Brazilian songs. Lullaby of Birdland, by the great pianist/composer George Shearing, a genius of jazz piano, who created the George Shearing style. We did this song together with Jobim's little-known "Garoto," in the choro style. Combined, the two songs are an example of what Brazilian musicians play in the Gafieiras (popular dance parties), normally with groups comprised of a rhythm section plus horns, especially the trombone. So in Love - Here we are with Cole Porter again, interpreted by the quartet plus Carol, phrasing very Brazilian as with the other songs. The combination of melody/harmony recalls, at some moments, the Jobim style. 'Round Midnight - Written by another genius of the piano, Mr. Thelonious Monk, this is one of the most beautiful jazz ballads I've ever heard or played. I became even more enamored of the song after watching the film with the same title. Every Time We Say Goodbye/Nuvens Douradas - A very passionate melody combined with a harmony that allowed me to create a very soft Brazilian arrangement, especially effective when combined with Jobim's "Nuvens Douradas" (Golden Clouds). Toada Jazz (O Retirante)/Night and Day - "O Retirante" (title of the original vocal version with lyricist Tibério Gaspar), one of the first tunes I ever wrote, ends the album in an instrumental interpretation by the quartet. Back when I wrote this, I was listening to a lot of Bill Evans-another genius of the piano. Maybe the chords he used in his tune "My Bells" had influenced me. Here I've combined "O Retirante" with another great Cole Porter tune, "Night and Day."

Here's what you say about
Carol Saboya - La & Ca.