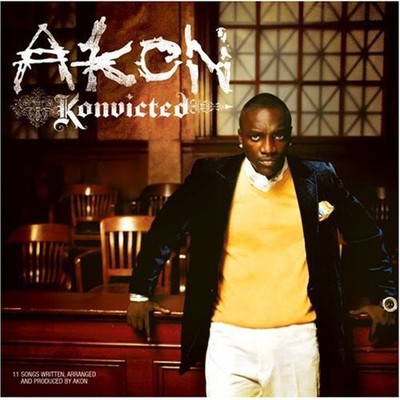 Konvicted edited edition. - Akon: Multi-Platinum singer songwriter, producer and international phenomenon Akon returns with his sophomore album. Akon released his debut album Trouble in 2004, which included the singles 'Locked Up (Remix)' (featuring Styles P Lonely, Bananza (Belly Dancer), Pot of Gold and Ghetto. Locked Up reached the top 10 in the U.S. and the top 5 in the UK, and was written after Akon was jailed for three years for armed robbery. In 2005, he released the single Lonely (whichsamples Bobby Vinton's Mr. Lonely. The song reached the top 10 on the U.S. charts, and was #1 in both Australia and the UK. His album also climbed to #1 in the UK in April, 2005. Recently, he gained more popularity after being featured in the song "Soul Survivor" with rapper Young Jeezy and then with his own artist, T-Pain. Akon also has his own record label, called Konvict Muzik Trouble has sold more than 3 million copies worldwide (1.4 million US). Since releasing Trouble, Akon has produced, written, and/or appeared on hit songs for Young Jeezy 'Soul Survivor' was also written by Akon), Elton John, R. Kelly, Gwen Stefani, Beenie Man and T-Pain. Konvicted features Eminem, Snoop Dogg, Styles P and T-Pain. Debut 'Smack That' video is directed by Benny Boom. The title Konvicted stems from Akon's awareness that people often convict him before they get a chance to know him or his music. Primarily self-produced by Akon, Konvicted challenges all previous assumptions. Akon's writing is prolific and the tracks are beautiful. Konvicted is an album full of smash, classic hits. If you thought you knew who Akon was, take a listen to the diversity of Konvicted and you will learn so much more about his enormous talents.

Here's what you say about
Akon - Konvicted.