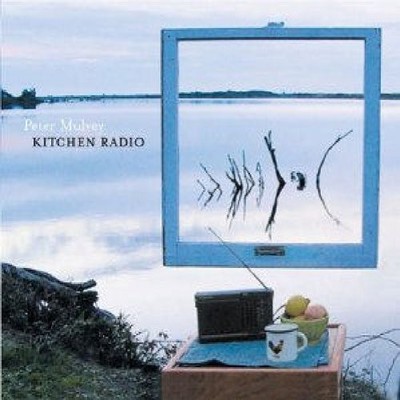 When he is home, Peter Mulvey begins his day as many people do, with the news of the day pouring out of the radio on his kitchen counter. Where that leads him, though, is the real story here. With Kitchen Radio, Mulvey's third album for Signature Sounds (his eighth overall and his first album of original material in four years - see Discography below), he has put the songwriting solidly front and center, and the result is a moving, deft portrait of a place where the personal and the worldwide intersect. Peter Mulvey and longtime writing partner and producer David 'Goody' Goodrich set the mood with vibrant, often surprising musical ideas. Supported by an excellent band of Boston's musical veterans, Mulvey's Kitchen Radio is an album of original music performed with grit and abandon. From this music arise lyrics with great economy, emotional resonance, and clarity. Images of travel and longing weave through the album - a longing for meaning, for love, for home, for a peaceful world, for peace of mind. Mulvey says his writing process occurs 'on airport runways, late at night in bed, across the kitchen table from Goody, and wherever else it seems to want to happen,' and on Kitchen Radio, as on all of his albums, from this process come songs which seem to want to happen; there's nothing forced here. 'Shirt' is a love song to moments given and snatched away by time. 'Sad, Sad, Sad, Sad (and Faraway from Home)' is a rollicking basher, a tour de force for the unreliable narrator. '29¢ Head' leaves us proud to make no sense of a nonsensical world. Kitchen Radio is clearly the work of an artist fully grown. Peter Mulvey began as a self-described 'city kid' from Milwaukee, Wisconsin. He played, wrote, and sang in bands while studying theatre there, and then traveled to Dublin, Ireland, where he learned the trade of the street singer. Returning to the States, he spent a few years in Boston, building an audience through street and subway performing, while also immersing himself in the thriving musical community. He recorded two projects for the now-defunct Boston imprint Eastern Front, and since his 2000 release The Trouble with Poets, has made records with the venerable singer/songwriter label Signature Sounds. His previous CD, 2002's Ten Thousand Mornings, recorded back on his favorite Boston subway platform, is a set of long-loved covers by the likes of Randy Newman, Gillian Welch, Elvis Costello, Marvin Gaye, and others. Mojo described the disc as 'simultaneously Mulvey's homage to his one-time training ground and a beautifully atmospheric record of gifted interpretations.' Though his home is now back in Milwaukee, Mulvey spends most of every year as a serious disciple of the road, touring relentlessly from Anchorage to Dublin and all points between. In addition to this rigorous calling, Mulvey has also written and performed music for theatre and modern dance (Sam Shepard's A Lie of the Mind, Amiri Baraka's Primitive World, and for The Wild Space Dance Company), penned articles for national magazines (Acoustic Guitar, Performing Songwriter, The Writer), and conducted numerous guitar and songwriting workshops. He has done voice-over work for various documentaries, has had songs placed in both film and television (the WB dramas Felicity and Dawson's Creek, independent films Origin of the Species and The Fisherman, the PBS documentary Wisconsin: An American Portrait), and has just wrapped production on a full-length DVD of his own, which features both interview and concert footage, to be released later this year. Mulvey also has an insatiable appetite for collaboration, appearing on colleagues' recordings, or just stepping on stage with other artists to try something spontaneous, something unrehearsed. In 2003, he released the trio album Redbird with fellow singer/songwriters Kris Delmhorst and Jeffrey Foucault - an album of 17 songs, ranging from jazz standards to old country tunes to contemporary covers, recorded in 3 days, around one microphone. In every aspect of his career, Mulvey draws on an extremely broad swath of influence; he is always reading, always listening, always eager to hear new poetry, modern minimalist composers, old-time fiddle tunes, Argentinean trip-hop, or top-shelf bar bands. And somehow, deep down, it all seeps into his work. Still, it is the live performance that defines that work. Night after night, solo, duo with Goody, or sometimes even with a band, Mulvey attempts to be the sum of his parts, to draw on all the musical legacies he has studied, to make a fresh, vital moment out of everything he and the audience have brought to the table that night. 'People need this. I need this. To come together in a room, to try to make music come alive, for real, for right now, and then to let it go... that is the whole deal for me.' If Mulvey's last record was a nod to where he is from, Kitchen Radio is an inspired telling of where he is going.

Here's what you say about
Peter Mulvey - Kitchen Radio.