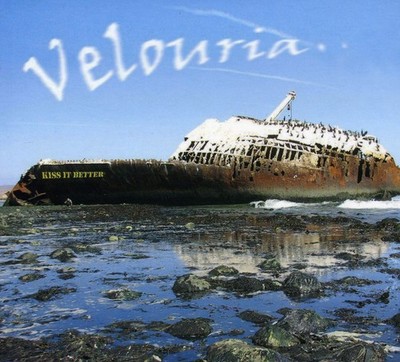 Like the shipwreck depicted on it's cover, Kiss it Better, Velouria\'s follow up (eleven years later, but never too late) to their debut in 1997, is kind of beautiful, kind of evocative of disasters past, and kinda \'rocky\'. Sorry about the semi-unavoidable pun, but this is a record that is meant to be cranked: it's melodies and harmonies--owing something but not too much to the titans of powerpop past--scream to be turned up to eleven. Principle songwriter/singer/guitarist Scott Taylor glories in memories of summers burned (and lovers too) and the sweet revenge of secret secrecies, the fun and fuckedupedness of being in a band that crafts songs and emphasizes sweetly distorted guitars in way that effortlessly thrills. His are pop songs that hit you like The Jam or XTC might have back in the hazy 80s: and in a way that, curiously, might just piss you off in that you won\'t be able to get them out of your head. They\'re the sort of catchy-catchy, carefully crafted songs that--damn it all--stick in your cerebellum before they\'ve even reached the second chorus. Velouria started off promisingly in the 90's as part of the legendary Silver Lake Scene that included Possum Dixon, The Negro Problem, Extra Fancy, Lutefisk, and The Geraldine Fibbers--a talent pool as various as any tide pool you wanna plash through like a six year old. Major labels (and minor ones) ran some of those bands aground--and Velouria, admittedly, floundered on the rocks. They got played on major stations and written up in brilliant, late-lamented rags like Option and Bam--but they sometimes got on the nerves of writers who wanted to \'help\' them along, and alienated entertainment lawyers and managers. They were courted by a couple of majors who balked and walked. They made a complete LP with a megalomaniacal, peyote-gobbling producer and--loathing the result--scrapped it altogether. They weathered a couple of tours (just barely) and went months without talking to each other. They went through what most indie bands go through, in other words, hell. And not hell. Why? Because separately/together they continued to write songs. Good ones. Clever ones. Ones with just enough musical repetition compulsion, as it were, that they became super fun to play--and even more fun to play for people occasionally, often in dank, dark, dirty dives. Bassist/songwriter/singer Fred Oliva (who penned a fourth of the tracks here) knows about dives. Longing and drinking, humor, jadedness and empathy--all these things Oliva\'s songs are steeped in. Moods and \'tudes and blacklights too. And equally as memorable as his bandmate's numbers--but in a different way that makes for an interesting contrast/comparison that, doubtless, you\'ll reckon for yourself. Drummer Rick Woodard\'s reliable buoyancy and confidence shines through on Kiss it Better and propel the songs along in ways you don\'t notice at first. Never one to show off, goof off, demand that you focus on his parts, Woodard\'s that ultra-rare thing: a musical drummer, a servant of songs, an anchor. That\'s the last nautical ref, by the way: we\'re getting (sea)sick of this stuff too--ha-ha. Rick gets a lot of practice in as well in that, like Scott, he plays in dreampoppy critical darlings the black watch, also on our imprint. Scott also produced the most recent tbw release, 2008's Icing the Snow Queen, to critical kudos and is hard at work with several other artists recording their latest/greatests at his studio in Weirdo-central (Sunny Sunland, California). As Scott noted in a recent interview in Amplifier, he\'s fascinated by the process of making a record--even one with missteps and setbacks, then big leaps forward (especially when Velouria clicked with Irish-American producer Tim Boland, whose credits include the Young Dubliners, the black watch, Throneberry and several original film scores), that eventually comes out as something to be very, very proud of. Proudly, then, The Eskimo Record Label presents you with Velouria\'s Kiss it Better. And spares you one last allusion to anything having to do with boating.

Here's what you say about
Velouria - Kiss It Better.