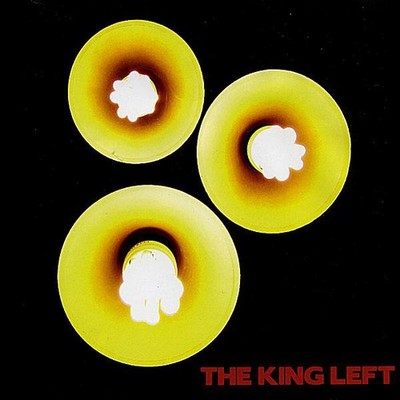 Most childhood friendships have a way of dissipating as life progresses. For The King Left, however, these youthful relationships were the start of a strong musical journey. Bassist Ian Bullett, guitarist Mark Grissom and drummer Graham Rothenberg all grew up in the blue-collar town of Elmira, New York - famous for being the place Mark Twain was both married and buried - before sojourning to Ithaca College. The group of friends officially became a band after being recruited by classmate Corey Oliver to help finish a senior film project. It was in this session The King Left laid the early stages of what would become "Counting Ghosts." The group promptly relocated to the boroughs of New York City after graduation. Gigging around Gotham, The King Left caused enough commotion to get asked out on a tour with Nightmare Of You. NOY's drummer (and ex-member of Rival Schools, CIV and Gorilla Biscuits), Sammy Siegler, took the guys into the studio to record their debut, self-titled EP and brought Ian Love (Rival Schools) along to engineer the sessions. The King Left self-released the three-song player on Dimestore Records in 2006, quickly breaking the Top 75 on the CMJ Radio 200 chart with hundreds of radio stations playing "I Have To Let You Win (Stop Trying)." Alternative Press subsequently featured the band in their "AP&R: The Best Unsigned Bands" section, The Daily Chorus named them one of the top 30 unsigned bands in the country and Aversion.com gave the release five out of five stars. The King Left is following up the success of their self-titled release with the New York Nothing EP, again recorded by Sammy Siegler, engineered by Ian love and self-released on Dimestore Records. All four new songs grew the band from the previous cornucopia of Brit rock influences to full textural soundscapes. "The Storm In A Teacup" brought a new breed of fans as bloggers began to clamor over the song and radio championed the single to break CMJ's Top 100. This led to opening slots for We Are Scientists, Joseph Arthur, Secret Machines, Tokyo Police Club, Jeremy, Enigk, The Long Blondes, Snowden, Le Loup, Film School and many others.

Here's what you say about
King Left - King Left.