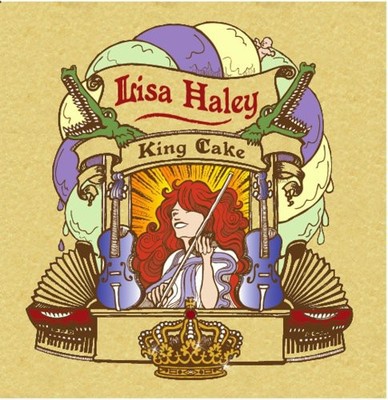 \'Joyful, exotic ...a Pop approach to Louisiana Zydeco... a la the bluesy moans of Janis Joplin...\' - Los Angeles Times The Violin Queen! Energizing audiences with the most exciting Americana/Cajun/Zydeco act on tour today! MEDIA EVENTS • GRAMMY Nominated album "King Cake" on Billboard World chart debuting #15. • Pollstar Box Office Summaries: 90%-100% sellouts on 2008 US & European dates. • 20 daytime sold-out shows at Hollywood Bowl Summersounds presented by L.A. Philharmonic Assn., a theatrical production featuring 10 of Lisa's songs. • Touring in more than 20 countries and the US, up to 150 days a year to millions of fans in concerts, festivals, films, TV, commercials, radio and educational shows worldwide. 1.) King Cake: Mardi Gras is a time for celebration!! For special parties before Lent, then most Cajuns give up revelry for 40 days. The traditional Mardi Gras \'King Cake\', in the shape of a crown, has symbolic colors of Purple (faith) Gold (wisdom) and Green (ressurection.) Inside each cake is hidden a small plastic baby Jesus. Whoever gets the baby in their piece of cake must throw the next party! \'King Cake\' sings of the destructive hurricanes in the Gulf Coast. Thousands of Americans there still have not been able to rebuild their homes. We encourage all Americans to lend a hand - these are folks just like us - New Orleans will rise again! 2.) Big Diamond Smile: My adopted father, Cajun accordion legend Joe Simien, used to play a tiny piece of a song that sounded a little like this, taught him by his grandfather. But he didn\'t know it all, and he had no lyrics. I found a diamond in the heel of my boot one day... just after I had lost another diamond from my ring. God has a sense of humor. 3.) Mardi Gras Party/Little Dreamer: A hundred-year-old Cajun waltz turned Zydeco! Joe Simien would stop in the midst of a two-step dance, and switching to a waltz, then back to a two-step. We carry on the tradition. 4.) Louisiana: I wrote this song when I found out I have a half-brother; my Mom gave him up for adoption when she was 18. A few years after writing it, he found us! And Mom was able to make peace with God. This song is for anyone who needs to find someone from their past. 5.) Have a Little Faith: Hope. Faith. Love. Everybody\'s gotta have \'em. A song to help us all keep pressing towards the goal. 6.) Paper in My Shoe: Back in the old days, folks would carry their money in their shoe. If they were poor, they might \'pad\' their shoes to cover any holes in the soles. Young men would write a girl\'s phone number down and hide it in their shoe. Take your pick. Zydeco accordionist Boozoo Chavis\' most famous tune. 7.) Always Be Your Guide: Sometimes I can hear little bits of a song floating in my head for years before I actually write it. If I don\'t rush it, sometimes God gives me the song, finished, all at once. This tune is about Faithfulness and the circle of life. 8.) Zydecosis: Look out! Oops, too late - you\'ve caught it! Zydecosis: there is no cure... all you can do is: Dance! Until the symptoms pass!! 9.) Your Folks Threw Me Out: A 100-year-old traditional song, from the days when parents kept control of their children even after they were married! 10.) Mardi Gras: The traditional song of Mardi Gras time - the young men get on their horse, ride from farm to farm, singing this song and asking for donations to go in the gumbo pot. Then they have a big Zydeco dance and a feast! 11.) Rubboard Stomach: Rubboard, washboard, frattoir, whatever you call it, this instrument is part of the Zydeco sound. Dance the Zydeco, give up your gym membership, save yourself a lot of money, and get in shape! 12.) Goodbye Sun: We had finished a show in England. The sun was setting. The bassplayer said, \'Isn\'t it strange that back home, our families are seeing that same sun rising?\' I was instantly, incredibly homesick. How small is the world. 13.) Don\'t You Tell Your Mother: We forget that it\'s only been a few generations since young people were chaperoned on a date. My mom said that when she was young, if you kissed a boy, you were considered engaged! How Romantique!

Here's what you say about
Lisa Haley - King Cake.