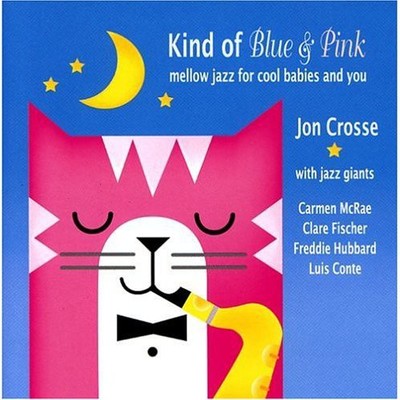 We are proud to announce that 'Kind of Blue and Pink' has been awarded a 'Parents' Choice Recommended' for 2006, and a 'National Parenting Publications Award', 2006! 'Kind of Blue and Pink' features the artistry of legends Freddie Hubbard, Clare Fischer and the late Carmen McRae with a roster of jazz luminaries performing ground-breaking treatments of children classics. Including 3 bonus tracks newly mixed from the original tapes, this CD gracefully bridges the jazz and childrens music genres to create magical musical moments for all ages. Jon Crosse has been playing and teaching music of diverse styles since his graduation from Ohio State in 1968, continuing his education with a Master of Music in saxophone performance from Cal State Northridge in 1995. A resident of the Los Angeles area since 1976, Jon has enjoyed performing with many jazz greats, including Clare Fischer, Alan Broadbent, Benny Carter, Victor Feldman, Freddie Hubbard, Carmen McRae, Wayne Shorter and John Patitucci. He has been heard on many films and seen on television in the U.S., Canada, France, Germany, England and Holland. He has been sax soloist with Paul Anka since 1983, and musical director of the Paul Anka shows since 1993, conducting the Atlanta Symphony, Baltimore Symphony, Cincinnati Pops, National Symphony, New Jersey Symphony, and the Pacific Symphony. Jon's compositions are heard on the recordings of the group Sacbe, and his arrangements of childrens songs are found on his award-winning recordings, 'Lullabies Go Jazz', 'Peter and the Wolf Play Jazz', and his latest CD compilation, 'Kind of Blue and Pink.'

Here's what you say about
Jon Crosse - Kind of Blue and Pink.